A spate of upsets have left many of us pondering whether or not home ground advantage is still a thing in the AFL. It’s time to answer that question.

Although Geelong & W Bulldogs have spent less than half the season in front, both have a winning record.

North & Essendon are the opposite. pic.twitter.com/PZVTb5kWHu 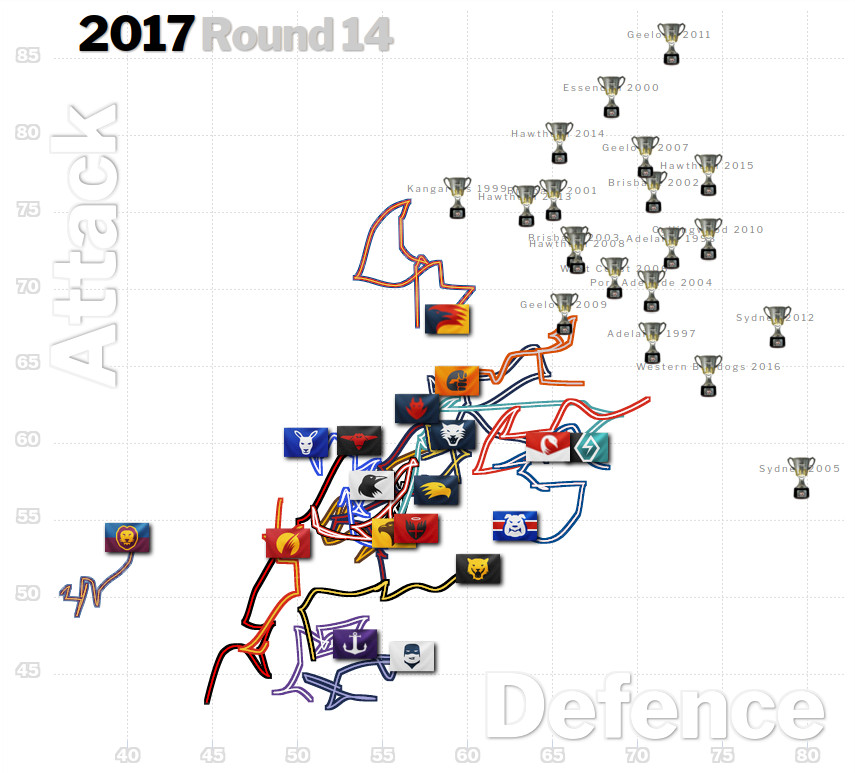 That’s a whole lot of teams nowhere near the premiership area!

It was an open field this time last year, too, but at least we had a few contenders. Most years, there’s usually at least one team snuggled in among a few premiership cups. But this year no-one’s been able to deliver sustained performance.

That makes for a volatile season, and the chance for someone to make a late run, or even do a Bulldogs 2016 and win it from way back. Something dramatic like that.

It was a great week for two teams, Port Adelaide and Melbourne, who put together impressive victories while their Top 4 competition in Adelaide and Geelong stumbled. Huh, it feels a little weird to be putting “Melbourne” and “Top 4” in the same sentence. What a world we live in. Anyway, the only thing that could have gone better for the Demons would have been if Fremantle slotted that last goal against the Cats, just to open that door a little further.

Squiggle is very disappointed in Geelong, because it doesn’t rate Fremantle much. So it was a dishonourable victory for the Cats, and they slide toward the middle of the pack.

Melbourne’s rise isn’t great news for Sydney, who play them this week. That one should be a great match.

Port get reward for a solid victory over Collingwood, again rolling out a very strong defensive effort in keeping the Pies to 9.8 62. Collingwood really have gone nowhere this year: they’re almost exactly where they started, and haven’t journeyed anywhere in the meantime. West Coast are similar.

Essendon, on the other hand, get better each week! Losing to the Swans in Sydney by a single point is good enough to send the Bombers flying up, up, again, like they have each week since Round 7 with the sole exception of their Round 10 loss to Richmond. 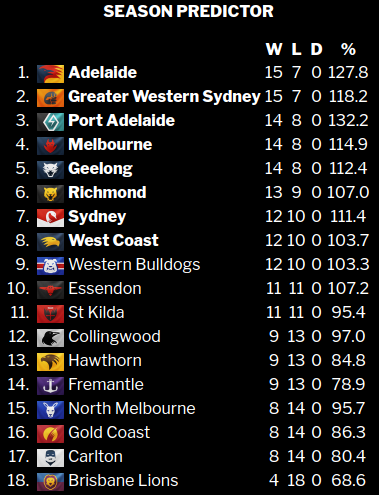 Things are very close in a few key areas there, and the Tower of Power (which is generated by a slower, more thorough series of simulations) disagrees, thinking GWS are more likely to snag an extra win and finish ahead of the Crows, Geelong will hold onto a Top 4 spot, and the Bulldogs will make the finals at West Coast’s expense:

Adelaide’s loss hurts their chances of finishing top quite a lot, partly because of missing the four points, and partly because what does it say when you lose at home to Hawthorn. It says you might not win enough games to finish top of the ladder, that’s what.

Meanwhile, no-one wants 17th! Every time Carlton or Hawthorn look like locking it down, they pull off an upset win.

Meanwhile on flagpole, it’s the same as always.

I’m old enough to remember the last time the AFL had regular byes, back in 1991-1994 when the entry of Adelaide made for an odd number of teams. It was popularly known as “the Killer Bye,” because everyone lost after their week off.

Matt Cowgill of The Arc concludes that nothing is different this time around: 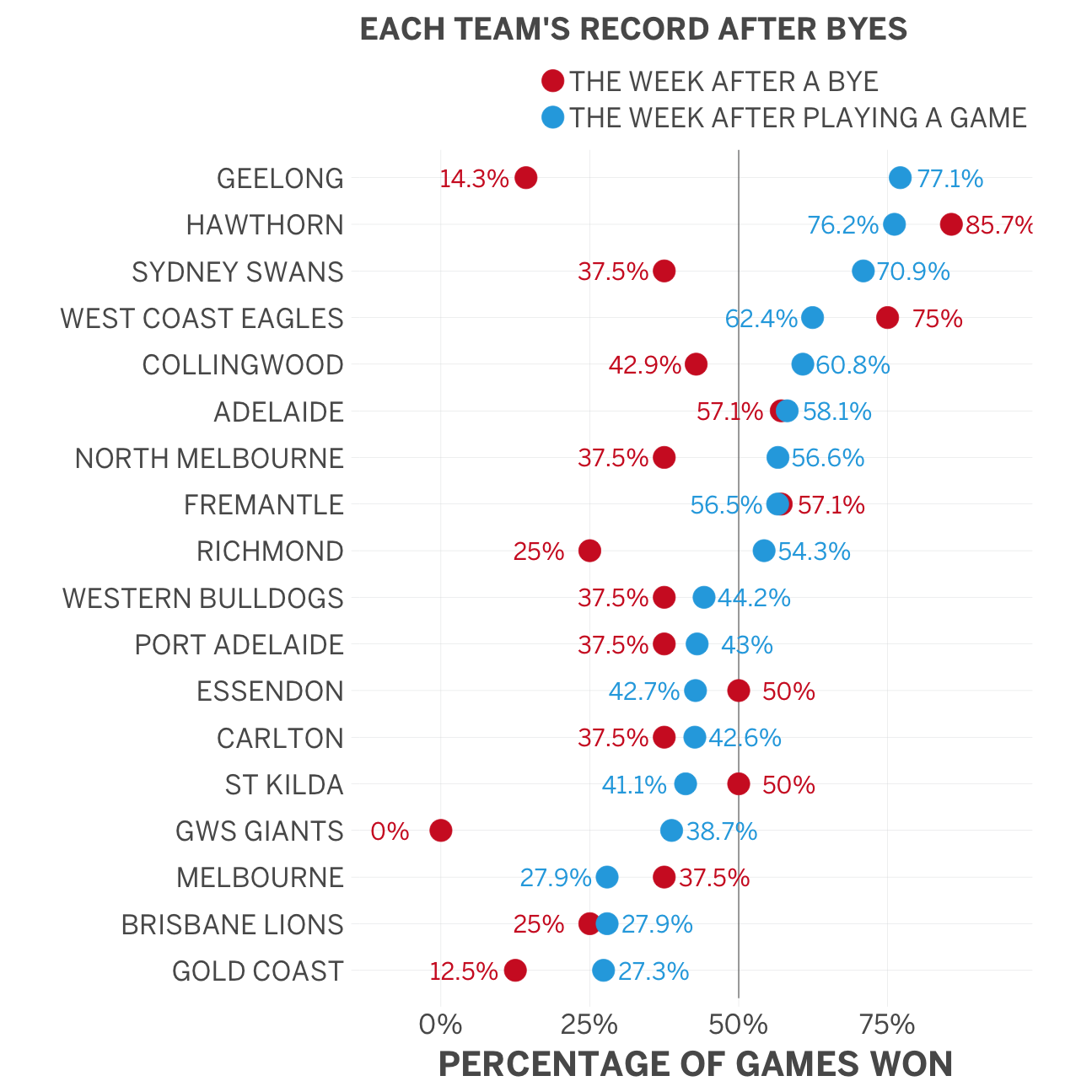 A week off can help heal battered bodies, but AFL teams surprisingly don’t seem to do better after the bye.

Source: AFL Footy Forensics Matt Cowgill on the effects of the byes

Bula! I’m back from Fiji. It was really nice. I learned to walk really slowly, like I had nowhere in particular to be, because I didn’t. It was like a parallel universe where everything was just fine. I even listened to the start of the Richmond v Sydney game in Nadi Airport and we were 5 or 6 goals up. Then I landed in Melbourne and everything was back to normal. 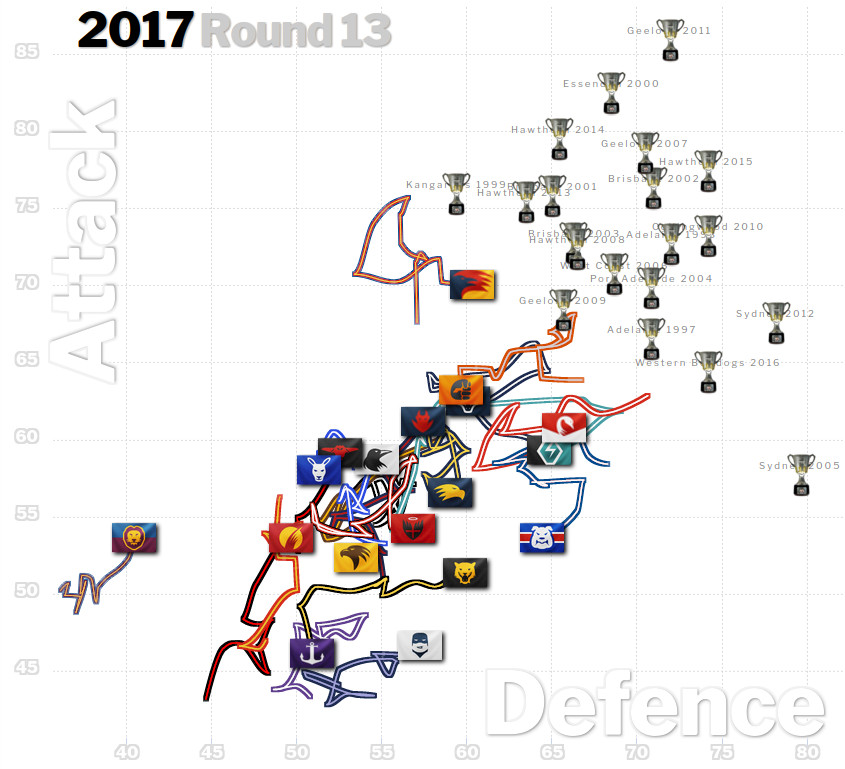 The real story right now is that the door to Top 4 is wiiide open. There’s a real chance that 14 wins might be enough to break in, and that’s a low number. Last year Adelaide missed out with 16 wins and a percentage of 138%, and West Coast, also with 16 wins, finished 6th. Only once this decade has the 4th-placed team held fewer than 16 wins: Sydney with 15.5 in 2013.

But before then — before the arrival of the expansion easy-beats in Gold Coast and GWS — teams commonly made Top 4 with 15, 14, or even 13 wins. We’re looking at a return to that.

Which means that although the most likely Top 4 remains the same as it’s been for a while — Adelaide, GWS, Geelong, and Port Adelaide — we aren’t far away from a world in which Melbourne squeeze in there, or Richmond, or one of a number of other teams. 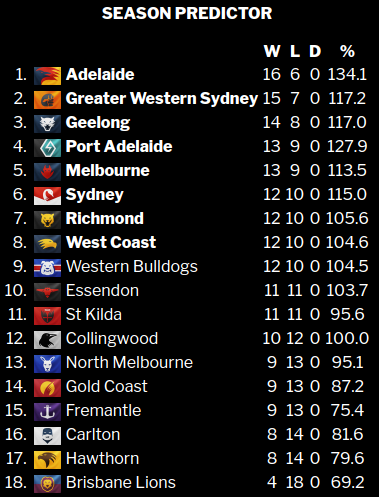 The Ladder Predictor tips Port for 4th with 13 wins, but I reckon someone will string together a chain of wins to drive that number a little higher.

Here’s the Tower of Power for the last two weeks, since I missed last week. You can see that there’s no more flattening out at the top, as things have really opened up with the Bulldogs and Port sliding while Melbourne, West Coast and Sydney have pushed up.

It was a huge week for Melbourne, who comprehensively dismantled the Dogs and bounced right up into contention.

To a lesser degree, it was also good for West Coast in beating the Cats, and Carlton in overpowering Gold Coast in Queensland.

The other big change was Carlton vacating a likely bottom-2 spot with wins over GWS and Gold Coast. Hawthorn are most likely to take it, but it could easily go to Fremantle, Gold Coast, or North Melbourne, who have fallen away badly.

Richmond v Sydney was interesting, because they’re two teams the squiggle rates quite differently to public perception: it’s always liked Sydney for finals even when they were 16th, and still doesn’t think too much of Richmond. The game actually played out extremely close to prediction, with squiggle tipping 73-80 and reality coming in at 71-80.

While it’s fascinating to imagine a ladder with Richmond’s close wins reversed, with the Tigers sitting two games clear with 11 wins and 1 loss, the fact is they haven’t been able to beat Fremantle (in Melbourne), a Bulldogs outfit that’s 6-6, and 12th-placed Sydney (also in Melbourne). They also haven’t put anyone away other than Brisbane, North Melbourne, and Carlton. Instead what they’ve mostly done is fight out two- and three- goal wins against middle-ish teams like Collingwood, West Coast (in Melbourne), Melbourne, and Essendon.

To the squiggle’s cold, unfeeling eye, this looks like a mid-tier team with a helpful draw, which has a solid defense but lacks the ability to score freely enough to be a genuine flag threat. If the Tigers can obliterate someone, that will change. But at the moment, it’s too easy to explain their results as within-the-margin-of-error of what you’d expect from a team that’s somewhere around the middle.

And because attack wins flags, the Tigers still look abysmal on flagpole, and the Crows still flap highest:

Hurling People Now counts the ways in which teams can pull off an upset and comes up with four:

Source: Anatomy of an upset – how do AFL teams overcome the odds to spring a big win? | Hurling People Now

Footy Maths Institute has a neat graph on Essendon over the last decade or so:

Away on holidays for the next week so there will be no posting, sorry.

Also as soon as I got on the plane, the Squiggle bot lost its connection with Figuring Footy, so we are without its tips until I get back and fix it. This means FF will be horribly misrepresented on the top leaderboard until then, unfortunately. But in the meantime you can source FF directly from http://figuringfooty.com! 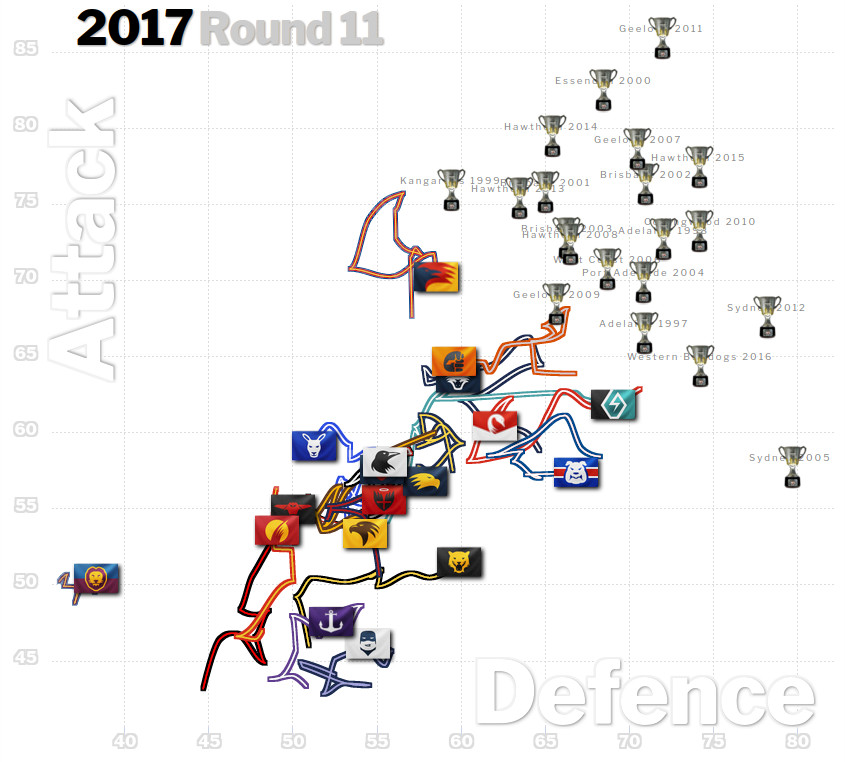 A good week for Geelong, who were able to lock away a win over major competitor Adelaide. They and Port Adelaide were the only teams at the top to have a positive week.

But the Giants have a lot going for them right now! By rights, their injury crisis should have seen them drop a couple of games, and then we’d be debating whether they could claw those back when they get more talent back on the park. But no. They skate along, winning all the close ones, keeping their chances of playing home finals intact.

GWS are the most balanced team in contention, and their squiggle shows where they go when they have something approaching full strength. That all makes for a very formidable combination come September.

Aside from that, not a whole lot of action this week, with results shaking out more or less as expected. The Tigers and Bombers did well, though, and it was especially handy for Richmond that the Kennedy-less Eagles are struggling, as those two teams are both fairly likely to finish 5th-8th, where home finals matter. 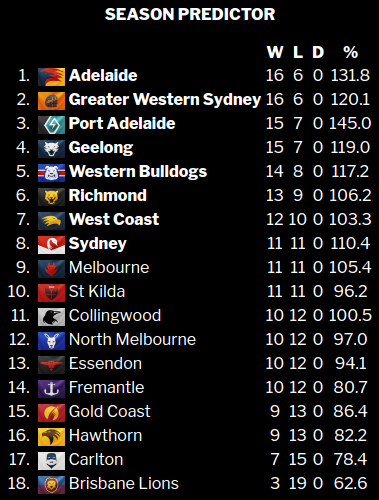 Gold Coast’s win sent Sydney to 16th on the ladder on the weekend, so Squiggle is looking for one heck of a run from the Swans from here.

At this point it’s very likely that the top 3 will come from GWS, Adelaide, Port Adelaide, Geelong, and the Bulldogs. That’s also the most likely top 5, but there’s much more uncertainty in the 4th and 5th slots, with the Dogs in particular capable of plausibly finishing just about anywhere.