Squiggle trades in cold, hard data, so there will be no place in this post for barracking or bandwagoning. Sure, outside of this thread, I may be clicking LIKE hard and often on every pro-Richmond post I see. Sure, this is the first time Richmond have made the Grand Final since I was 9 years old, and my parents took me to the Royal Melbourne Show on Grand Final Day because it was less crowded. “You can watch the next one, Max,” they told me, and you know what? I bloody well will. I have a ticket and I am going. Sure, there were times when it felt like this would never happen in my lifetime. But you won’t catch me mentioning any of that here. 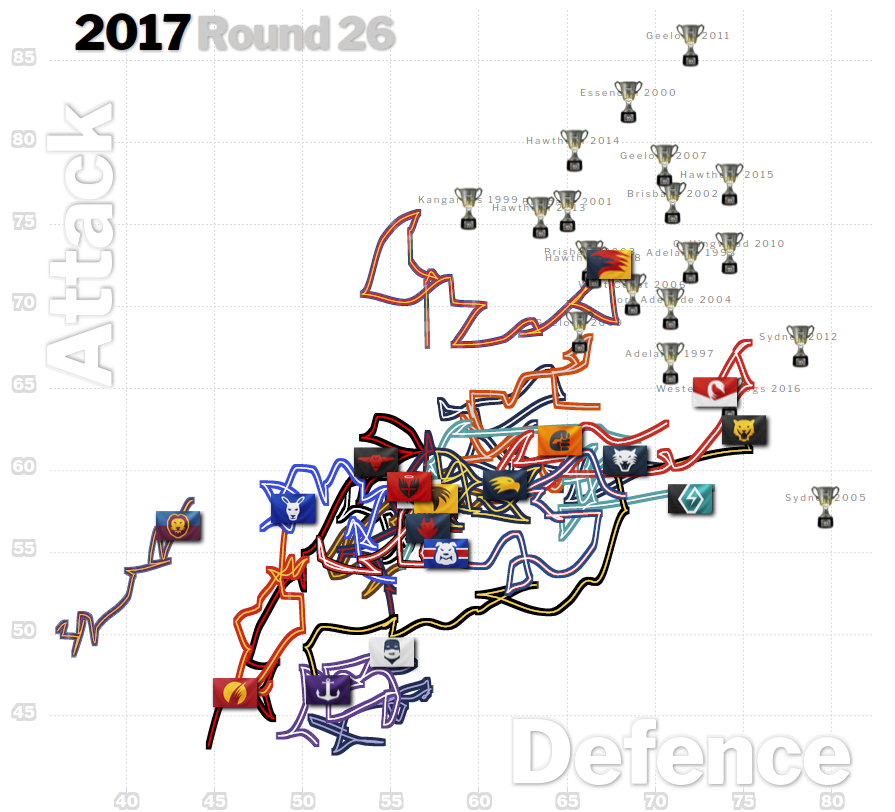 Both favourites won their prelims comfortably. But Adelaide were more impressive in defeating the Cats 136-75, while in PF2, or as squiggle knows it, “Who Wants To Be Slaughtered By Adelaide,” the Tigers ended the Giants 103-67.

That result leaves the Crows approaching somewhere near the gravitational centre of the squiggle’s premiership cups, which means their 2017 results are similar to those of many premiership teams from the last two decades. They’re still somewhat modestly rated for a premier, but they’re not far off it.

The Tigers, on the other hand, are a more niche model, belonging to a distinct class of teams with strong defences but mediocre attacks. That does include a few premiers, most notably the reigning premier (for a few more days, at least) in the Western Bulldogs, but many more who fell short, including a swag of Ross Lyon-coached teams. 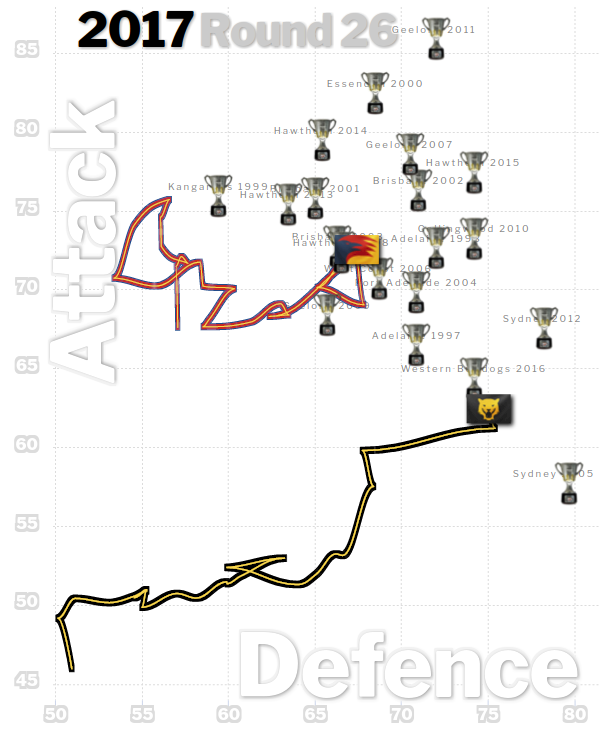 Adelaide’s year bears a striking similarity to 2016, when the Crows also opened with a series of blisteringly high-scoring games, then began to tighten up defensively as well: 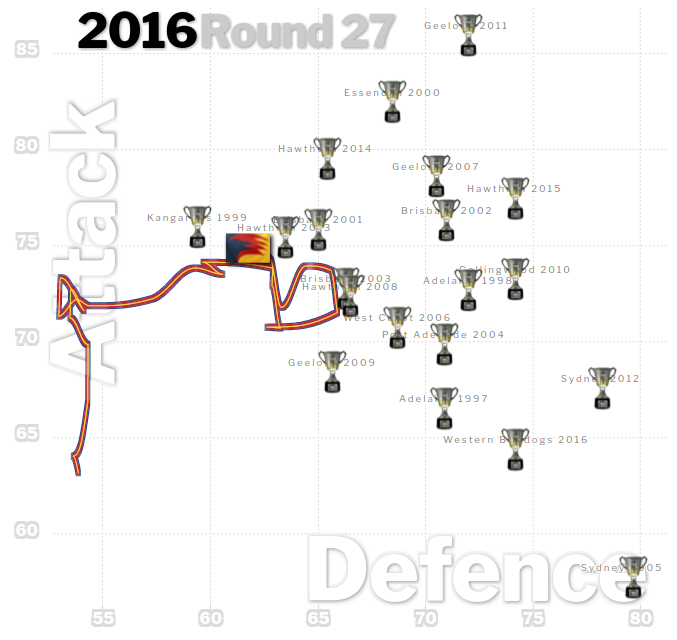 The Crows were squiggle darlings for most of last year before wobbling late and falling to the Swans in a semi-final that psychologically scarred Adelaide-based squiggle fans for all time. They still don’t look enormously different to that team, but they’re better balanced and the opposition standing in their path to a flag has been weaker, with GWS in particular less dangerous than the 2016 version.

The 2016 semi-final loss is interesting in light of this year’s Grand Final, because the 2016 Swans and 2017 Tigers look to have a bit in common, with both enjoying low-scoring slugfests. So one might wonder whether the Crows have a weakness in that area that the Tigers are designed to exploit. But by moving into the more balanced area of the chart, Adelaide are showing they’re more well-rounded and less brittle, better able to deal with a variety of game plans.

Squiggle is unique in placing a particular emphasis on attack-defence balance. Computer models commonly produce a single “strength” number and tip whoever’s strongest. Squiggle does this for all games except the Grand Final, where it leans heavily toward the team with the stronger attack, due to the over-representation of that trait in past premiers.

Without this, Squiggle would still tip Adelaide, as the overall better team, but far less emphatically.

Not only is Adelade the better-rated team, and not only do they have the better attack, but they’re also more balanced. Most Grand Final upsets have happened to unbalanced teams, such as Sydney 2016 (defensive specialist) and Hawthorn 2012 (attack specialist), and there are quite a few near-misses as well, like a well-balanced Port Adelaide coming within 3 points of attack-first Hawthorn in a 2014 prelim, and Geelong doing almost the same thing against the Hawks a year earlier. So while it’s been more rewarding to be a team that engages in high-scoring games rather than low-scoring ones, it’s also been preferable not to be too far one way or the other.

There are exceptions: The Bulldogs should have lost to GWS in last year’s prelim, according to this theory, and Geelong shouldn’t have lost to anyone in 2008. But in general, it’s ideal to be the best overall, the best attack, and the most balanced – and compared to Richmond, Adelaide are all three.

As such, Squiggle is very heavily into Adelaide, tipping the Crows by 41 points.

But that doesn’t mean the Tigers have no hope. While most of the Squiggle stable of algorithms are tipping Adelaide, there’s a healthy contingent of counter-tips from venue-based models, many of which take special note of Richmond’s amazing record at the MCG this year. That stable contains 202 algorithms at last count, and of the 36 that favour the Tigers, all of them pay special attention to the venue, either in the form of general interstate home ground advantage or results at the ‘G in particular.

That’s because Richmond haven’t had a bad match at the MCG since Round 8, when they lost after the siren to Fremantle. There were really only two Tiger embarrassments this year: one at the hands of the Crows at Adelaide Oval and another courtesy of the Saints at Docklands. But at the ‘G, Richmond have gotten better almost with each passing week. Their record since the bye looks like this:

That compares favorably to the Tigers’ record away from the MCG, which is still good but shakier, including the aforementioned St Kilda humiliation as well as a loss to at Kardinia to Geelong.

The Crows’ record at the MCG over the same period is:

Their only other game there this year was a 24-point defeat of the Hawks in Round 2. So if you believe that the venue makes a difference, there’s plenty of reason to think it will strongly favour the Tigers. And it’s been a good year for venue algorithms: they’ve actually been the most accurate of the stable this year, both in terms of tips and average margin predictions. They don’t have the same long-term record, but they have had the better read in 2017.

It’s also worth mentioning that Squiggle has underrated Richmond all year, as it did with the Bulldogs last year. When a team improves quickly over a short period, as the Tigers have in rising from a 13th-placed finish last year, Squiggle takes time to be convinced they’re the real deal, since that kind of radical change is unusual, and more commonly signals a team that’s temporarily overperforming and will soon revert to their natural level. If the Tigers really have become a lot better at football in a short period, they may still be underrated.

In terms of similar Grand Finals, 2017 bears the most resemblance to 2006, when West Coast (a well-balanced and modestly rated team) defeated Sydney (a defensive specialist) by 1 point: 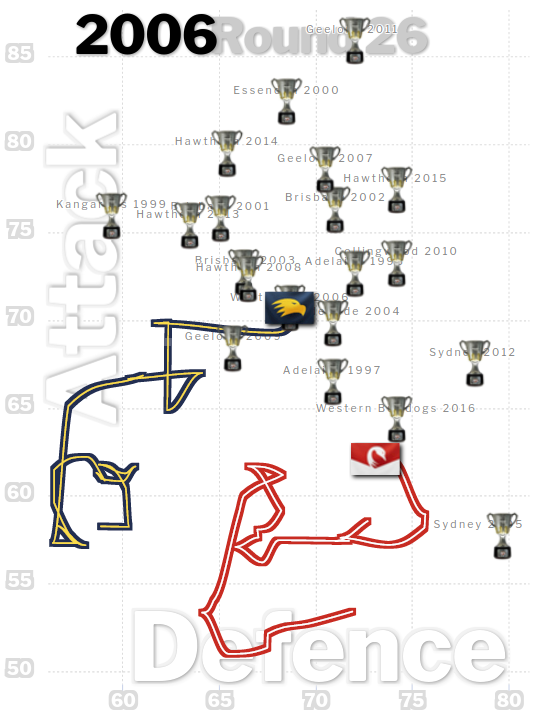 That was, of course, one of the great all-time cracking Grand Finals, so we’d be blessed to get anything like a repeat.

In summary: Adelaide are deserved favourites, and have the ability to kick away and win by a significant margin. But any footy follower knows anything can happen in football, and there’s room between a 15% chance and a 0% chance to drive a premiership cup through. If the Crows don’t break free from the Tiger stranglehold and get locked down into a scrappy, high-pressure series of ground contests; if they kick inaccurately; if the venue plays a role; then it will be a Richmond premiership.

P.S. I just wanted to finish the post with the phrase “Richmond premiership.”