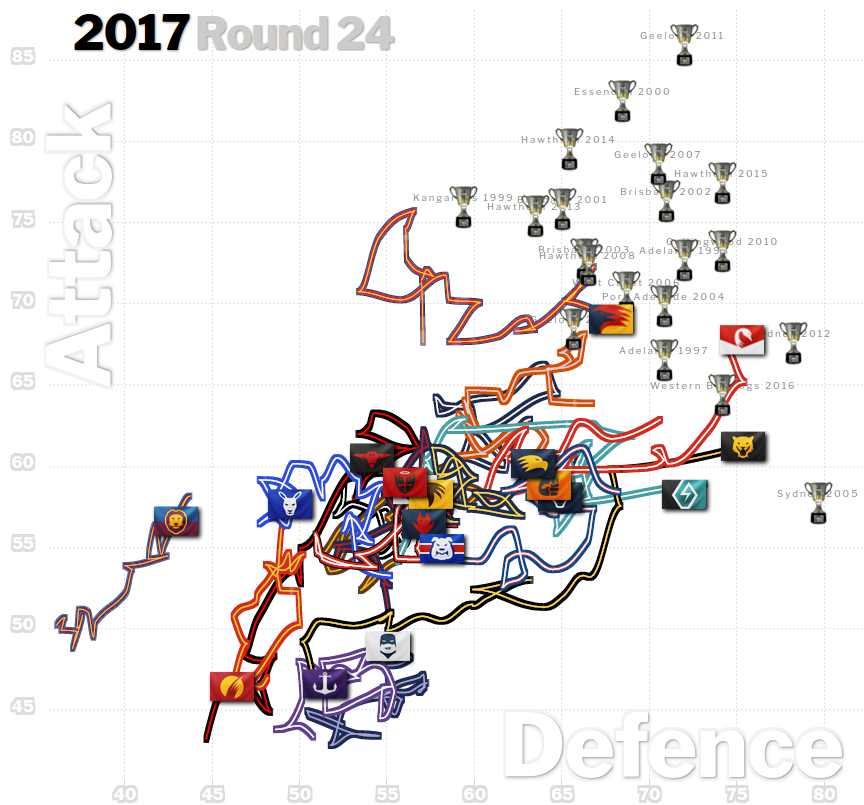 Throughout the season, the squiggle refused to rate Richmond any higher than a somewhat-above-average team. Now there are only six teams left, the Tigers are rated 3rd, i.e. still just on the better side of average. But they made a big move after holding Geelong to only 40 points, essentially pulling level with Adelaide in terms of raw form.

That’s still not enough for a flag, because squiggle respects the historical fact that attacking teams have outperformed defensive teams when it counts over the last two decades. So while the Tigers have a dream run to the Grand Final, avoiding both top teams and hosting an interstate opponent for a prelim, squiggle doubts they can contain the scoring power of Adelaide or Sydney if they get there.

Nevertheless, the Tigers are certainly close enough to give it a shake, which is just about the most exciting thing I’ve experienced in my entire football-following life. So that’s something.

There’s not a whole lot to say about Adelaide v GWS or Sydney v Essendon, both of which played out to expectation.

But Port v West Coast! Once again, the Power failed to knock off a well-rated opponent, although only just, in the cruelest possible way. Taking an 8 scoring shot advantage and turning it into 2 fewer goals and 10 more behinds is going to sink any team.

Despite all the evidence Port has offered to the contrary, there’s still reason to believe they’re a very good team, and if they can avoid self-immolating over the off-season, they could follow in the footsteps of Sydney 2015, who kicked themselves out of their first final against Fremantle (7.18 to 10.9), then rebounded the next year to win the minor premiership and contest the Grand Final. Port’s stumbles in 2017 have been absurd, dramatic and memorable, so it’s easy to forget they annihilated the bottom tier of the competition, beat most of the middle tier, and weren’t too far off the rest, while recording wins over Sydney and West Coast.

Meanwhile, the Eagles are lurking just close enough to be dangerous. All year, they’ve been thereabouts, competitive in practically every game, including those against everyone they have to beat for the flag. They are rightly underdogs, but having landed on the soft side of the draw, it’s not beyond the realm of possibility that the Eagles could defeat the Giants, who they only lost to by 8 points earlier this year, then Richmond, who they lost to by 11, and then take on Sydney or Adelaide, both of whom they’ve beaten.

An Eagles flag would be mind-boggling, given they were unlikely even to make finals a few rounds ago. In another year, I’d say it was fanciful, because normally we have at least one truly dominant team plus a tradition of rested Qualifying Final winners beating up Semi-Finalists. But this year, our top two in Adelaide and Sydney haven’t created as much separation from the field, you only have to beat one of them (unless you’re Geelong), and there’s the unknown quantity of the pre-finals bye in play. So almost anything is within the realms of possibility.

On flagpole, it’s bombs away and lights out!

Richmond squeak into 3rd even with the heavily defensive game plan that Flagpole abhors. And Geelong are still rated pretty well, even though in the real world everyone has concluded that they are the worst football team to ever play the game and who will win that Adelaide v Sydney prelim. 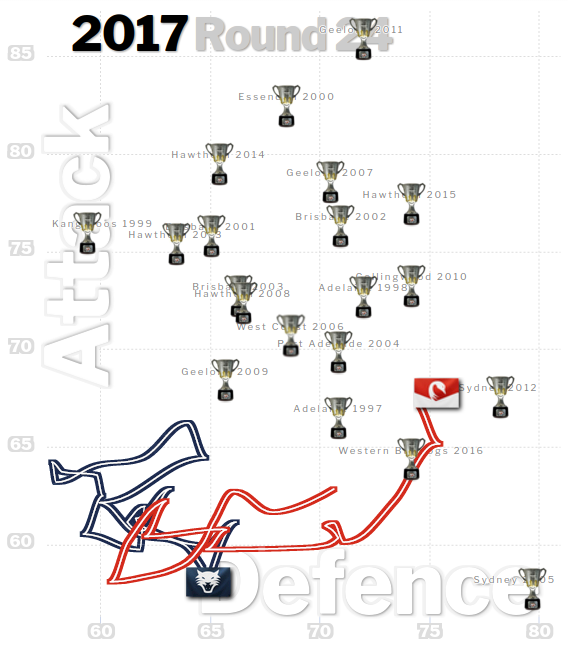 There’s a long history, of course, of people overrating Elimination Final winners and underrating Qualifying Final losers. But it’s still hard to see Sydney dropping this one: They’re a premiership favourite who finished much lower on the ladder than their form suggested, while the Cats made top 4 on the back of a few close wins and didn’t fire a shot against the Tigers. 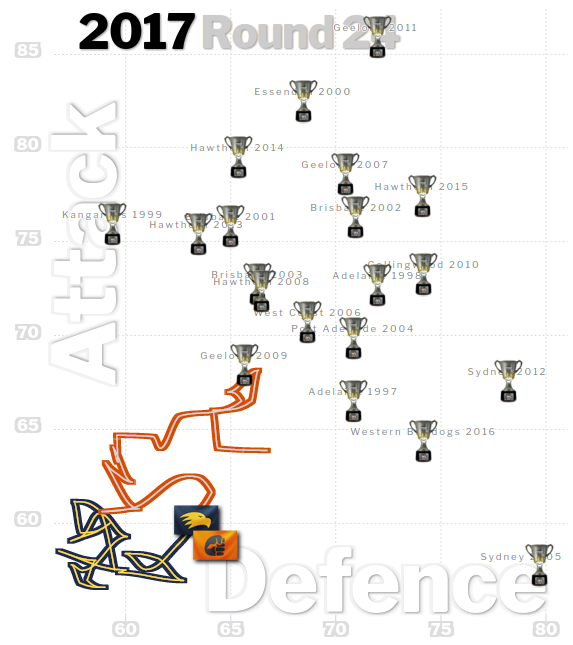 This one is harder to pick, with neither team having stood out over the season, but both also refusing to go away. In a neutral venue, squiggle would pick the Eagles, but only just; in NSW, it gives it to the Giants. 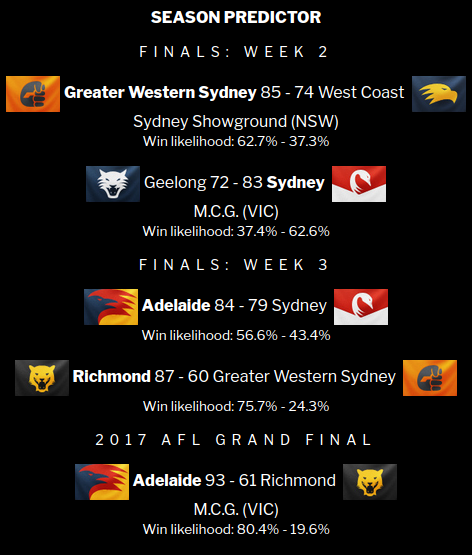 I’m just going to stare at that for a while now. I basically made that Squiggle Doors function just so I would have an excuse to imagine Richmond Grand Finals in alternate universes. Now there might be one in this one! That’s even better.

By the way, I would also like to take this moment to enjoy when hardly anybody has started hating Richmond crowds yet. I know that’s coming, because Richmond crowds when the Tigers are on the verge of success are the fucking worst. Not for me. They’re fine for me, because I’m wearing yellow and black. But for other teams’ supporters. I didn’t see anything bad at the Geelong game, but I’ve been to every final of the last five years, and they bring out plenty of mentally damaged individuals who have been psychologically broken by the last 35 years of heartache and now clearly believe they are the plaything of a malevolent deity who can only be banished by a spray of alcohol-fueled insults. If we make a Grand Final, it’s going to be so ugly. I mean win or lose, either way, there is going to be some shit on display. So it’s nice to get in before that.