There’s been a clear top 2 for a while, and it’s Adelaide and Sydney, who are the first and sixth teams on the ladder. If it were one year ago, everyone would be writing Sydney off, as no team had ever come from outside the top 4 to make the Grand Final, let alone win it. But the Bulldogs changed that, and then spent this season dropping hints that it wasn’t because they had become a superstar team without anyone noticing.

So it’s all bets off, as far as I’m concerned, and current form is king. 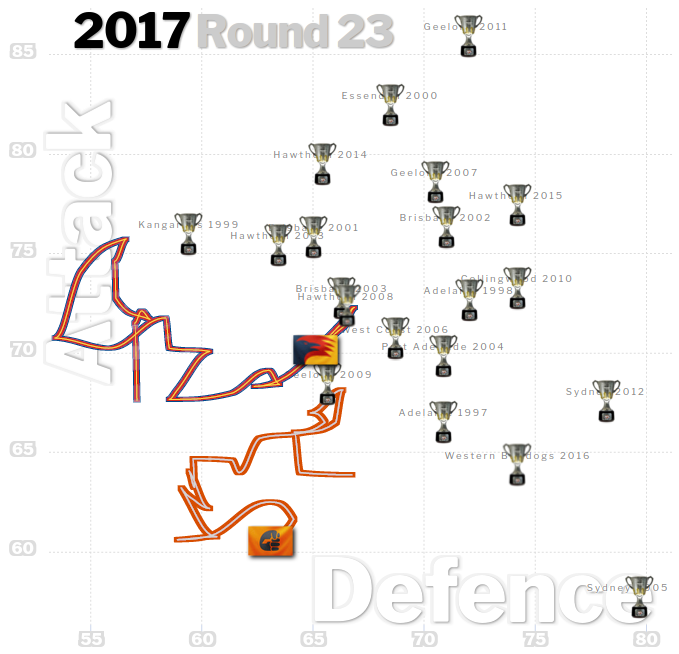 The Crows started the year with a series of high-scoring matches, propelling them vertically up the chart. Then before you could say “premiership favourite,” they were humiliated in consecutive matches by a Spoonbowl contestant and a team that didn’t want to play finals if it meant having to beat Collingwood.

Since then, though, Adelaide have toughened up defensively while retaining most of their attacking power.

The Giants began the year as the second-ranked team and fell as injury bit. They could easily have finished outside the top 4, but managed to scrounge together enough close wins and draws to give themselves a straight shot at a Grand Final. It’s been that sort of year for GWS, with few outstanding performances and plenty of shaky ones that haven’t cost them. 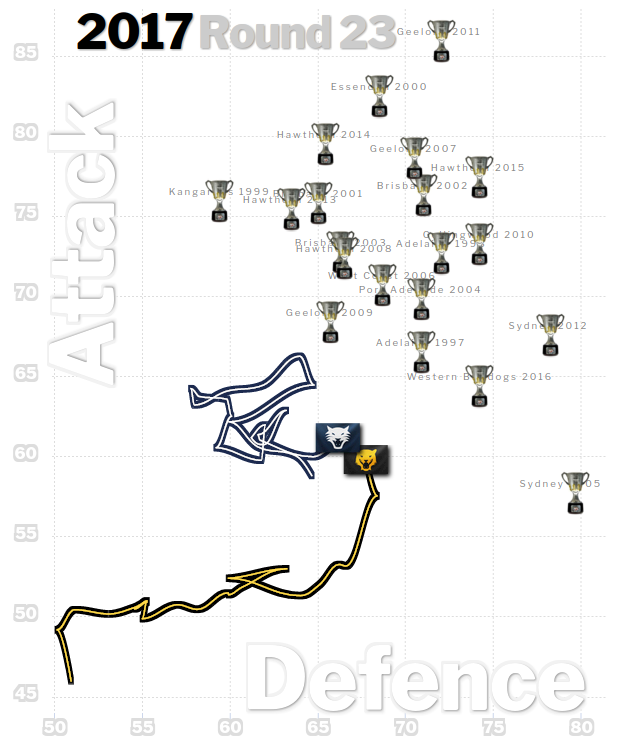 We need to zoom out a bit further for this one, because Richmond started the year ranked as a bottom 6 team. That means that not only did they have a bad 2016, but they didn’t show anything toward the end of the year that suggested a rise was on the cards, either. But rise they did, becoming a low-scoring but defensively formidable team. And in the final two games, they showed some attacking power as well.

The Cats are in a similar area, but have trod a far more meandering path, with a season that was never too good nor too bad for too long. They’ve demolished poor teams and recorded solid wins over good ones, but also had a raft of eyebrow-raising performances, such as losing to Gold Coast and squeaking home against Fremantle and North Melbourne. As such, it’s hard to draw a steady bead on the Cats, or find anything like a trend. 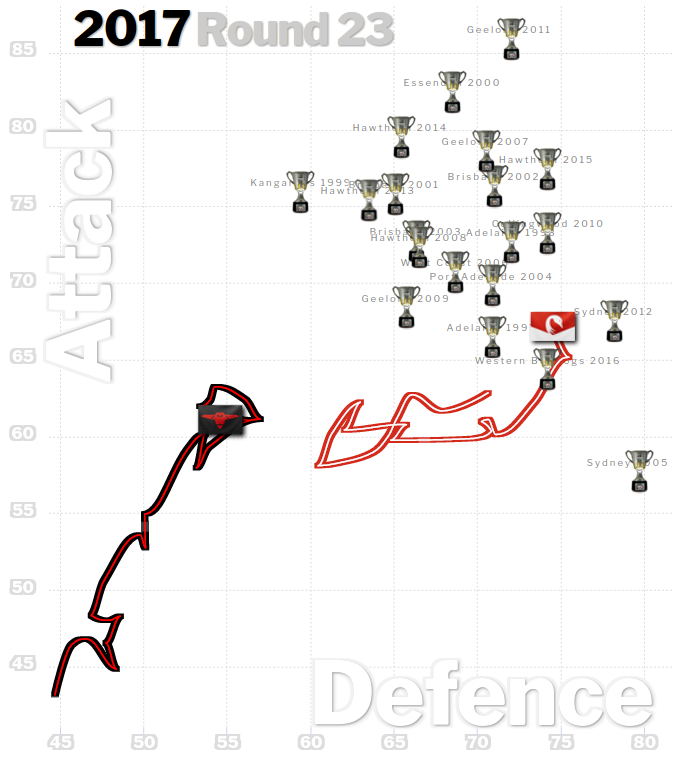 Hard to say which line is more extraordinary: Essendon’s emergence from the absolute bottom to reach finals, or Sydney’s tale of a season in two parts. The Swans were never quite as out of form as their ladder position of 16th at the mid-season bye suggested, but there’s a clear inflection point here, with an early slide arrested and then dismissed as if it never happened. Since Round 7, the Swans have become once again a completely typical Sydney side, of the kind that made the Grand Final in 2014 & 2016 and won it in 2012. There’s an alluring discipline about them, with no really head-scratching performances after those first 6 rounds.

Essendon similarly took 7 rounds to really get going, notwithstanding their emotion-charged Round 1 win over the Hawks. They’ve made finals on the back of a mid-season stretch that saw them account for Geelong, West Coast, Port Adelaide, and St Kilda, during which time they also didn’t fall too short of Sydney, GWS, and Richmond. The last month has been shakier, though, with the Bombers losing comprehensively to Adelaide and the Bulldogs, while not showing terribly much against Gold Coast and Fremantle. 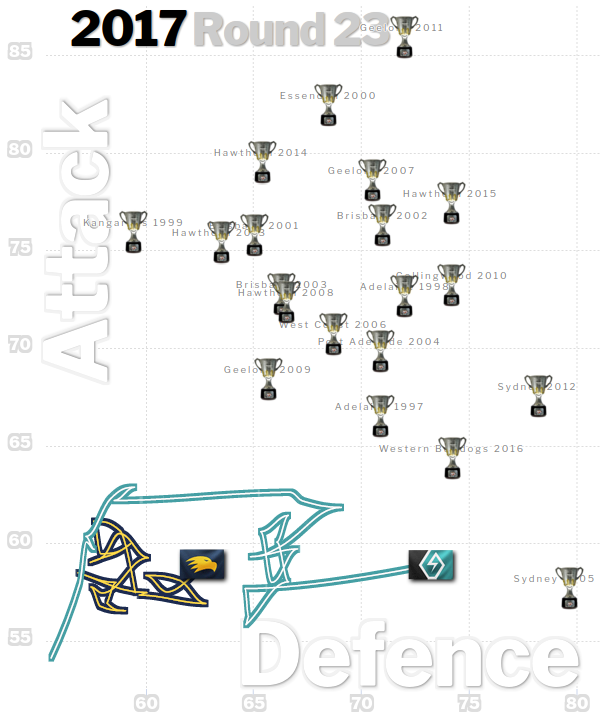 All year the Eagles have delivered roughly what you would expect: sometimes a little more, sometimes a little less, but never too far beyond expectation. They stand in stark contrast to Port Adelaide, who, when they’re on, are very, very on. When they’re off, Port are still usually competitive, but it’s that gap between their regular setting and the turbo charge switch they flip against lower sides in Gold Coast, Fremantle, Brisbane, and Carlton that has earned them the “flat track bully” moniker.

That’s probably undeserved, even though they haven’t proved it yet. The Power have been a candidate for Top Four for most of the year, holding the league’s second-best percentage, while the Eagles have spent it skirting the fringes of the Eight. If the results of other games had gone only slightly differently, Port could easily be playing a Qualifying Final this weekend with the Eagles players on holiday.