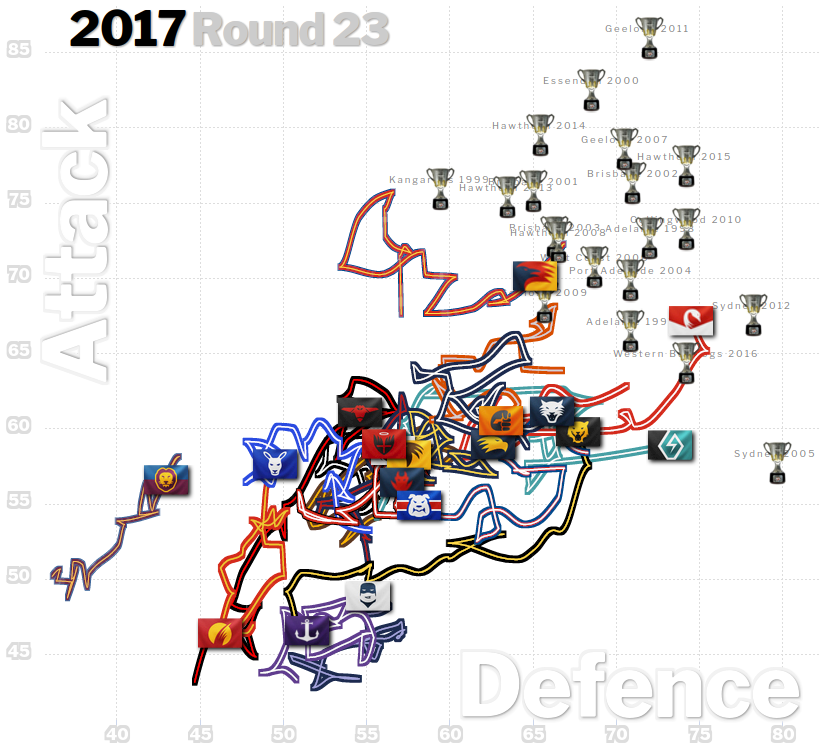 You know I don’t believe in the whole idea of Flat Track Bullies, but god damn, Port Adelaide, you are making it difficult. The Power grew ten feet tall upon spotting a spindly, bedraggled Gold Coast, and proceeded to pound the snot out of them, while periodically stopping to flex and grin at nearby girls, and slicking back their hair with a comb. God damn you, Port Adelaide. That’s so uncool.

When Sydney curb-stomped their bottom-4 opponent, they had a little class. They were positively gentlemanly in allowing Carlton to kick 8.9, compared to the Power’s nipple-cripple of the Suns that permitted just 3.2 20.

Port Adelaide’s performance was mainly impressive for its miserliness, since scoring 135 against Gold Coast isn’t that special. It’s only 30 points more than the average team puts past the Suns. As such, the Power go shoooooting off to the right, but don’t climb much vertically. The Swans, on the other hand, see mainly vertical gains after scoring 138 against a significantly better defense.

Gold Coast finish the year as the worst-ranked team, seeing off a challenge from Fremantle.

The Cats and Tigers both had impressive wins. After some accurate goal-shooting against the Saints, Richmond are almost starting to look like a normal team, i.e. one that can score. In fact, the team that Richmond most resembles right now is Geelong, so it’s fitting that they get to Highlander it in a Qualifying Final.

I hope you appreciated my cool detachment in that previous paragraph. I’m like, sure, I write about Richmond making a QF all the time. No biggie. You can’t even tell I have my legs crossed like super tight.

And now for Melbourne. I take no joy in Melbourne. It’s a bit surprising because I was really pissed at Melbourne after the whole Jordan McMahon game thing. But no, apparently I have no more schadenfreude to give. This one sucks, Melbourne. Here is the tragedy of Melbourne in tower form:

Is now a good time to mention that Squiggle was tipping a Swans v Adelaide Grand Final before the start of the year? I feel like yes.

Still no freaking love for the Tigers. 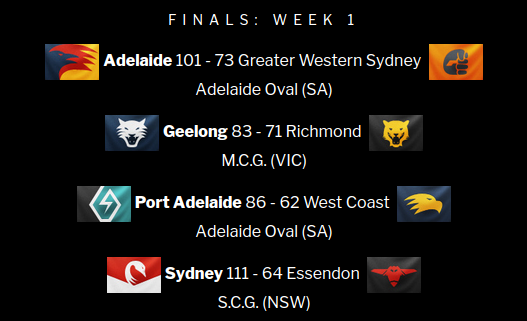 Last year, Squiggle had an impressive 67% hit rate in tipping finals that didn’t involve the Western Bulldogs. After including the Dogs, it was a bit less impressive, going 3-6 (33%). But 2016 was a strange year; the home (higher-placed) team has won finals regularly since 2000, going at about 72%. So you’re normally pretty safe backing them.