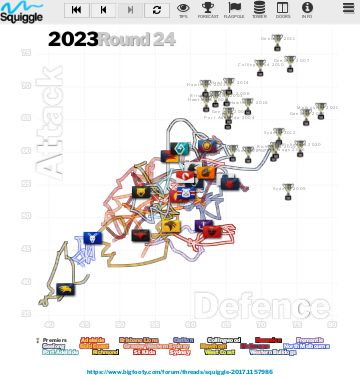 Actual football involving real humans is just around the corner! Which means we need to wrap up this virtual stuff!

The last week of Home & Away will be Round 11 by the original fixture, i.e. the one with Port Adelaide v St Kilda playing in China.

Since there is no actual football, we will do the next best thing: simulate it.

With the support of the world’s best football computer models, Squiggle will play out each and every cancelled game in real-time, as if it were really happening.

Goals. Behinds. Score worms. Quarter time breaks. They will all unfold here at the exact same time the match is supposed to be played.

This will continue all season long, game by game, until actual games resume. We will track a virtual Ladder and Top Eight. If, God help us, we don’t get real football back by September, we will hold virtual Finals and award a virtual Premier.

This Thursday night at 7:25pm Eastern Time, Collingwood will play Richmond in the first virtual match in real-time, here on this site. You can check in and see it happen.

I believe Australia needs football. I need football. Or, in the absence of the real thing, a simulated version from computer models.

Usually models make predictions about the most likely outcome of a game (e.g. “Collingwood by 4 pts”). But they can also generate batches of simulations, where if Collingwood is a 60% win chance over Richmond, then in 100 sims, Collingwood will win 60 of them. In the other 40, Richmond will win. (In a few, unusual things might happen, like a team scoring over 120 points.)

Participating models supply Squiggle with their sims. At match time, Squiggle randomly plucks one out and unspools it in real-time. No-one knows in advance which sim it will be.

My Promise To You

This is as rigorous a process as I can make it, drawing from the work of highly talented football analysts and math wonks who created the world’s best football models.

There will be no bias or fiddling. Just hard maths and cruel random variation.

The second new model for season 2020 is The Flag, which runs numbers on a truly bewildering number of different sports and leagues, including AFL. You can also find author Nick Fredriksson on Twitter.

First new model for 2020 is an AFL Gadget-type Operator! Read about this BT-inspired model at https://aflgo.org/ and follow AFL_GO on Twitter.

If you want to do your own football analysis today – write an article, create a chart, build a neat online tool – you can’t legitimately acquire the most basic stats about AFL matches, not even the scores.

In practice, small operators – armchair analysts and independent sites – either laboriously compile these stats themselves, or else ignore the Terms of Use and write programs to download them from somewhere else anyway. Not everyone can do this, though, and for those who can, it can be tedious and time-consuming, as whenever the website updates its format, the scraper stops working or begins pulling corrupt data. And sometimes the source just plain disappears.

The AFL could and should create an API: a simple online interface that publicly serves up very basic football data such as match scores in a computer-readable format. It could do this simply, cheaply, and without exposing any advanced stats that Champion Data rightly consider to be proprietary and valuable.

Today there are excellent free APIs for practically all major world sports, except AFL. There are dozens for cricket and rugby, and hundreds for soccer. In the US, you can’t move for tripping over a baseball, basketball, or football API. But for AFL: nothing.

Regardless of where you land in the wider debate over exactly which stats should or shouldn’t be kept secret, surely no-one is being served when basic match scores are kept under legal lock and key. Fixing this could create a platform for analytics innovation, discussion, and expansion.

Here is a 12-tweet thread about the Ladder Scoreboard that I introduced this year, which tracks the accuracy of models’ weekly ladder projections.

With the home & away season tucked away, it’s time to look back and see whether all those preseason predictions that were floating around earlier in the year turned out to be prescient… or putrid.

Head and shoulders above the rest, AFL Lab correctly tipped Geelong for the minor premiership and Sydney to finish bottom 4. It was one of few ladders to resist the temptation to fit Adelaide into the Top 8. While, like every ladder, it had Melbourne much too high (3rd) and Brisbane much too low (12th), it is otherwise excellent, with no fewer than 13 teams tipped within 1 rung of their actual position. Score: 71.5

In March, AFL.com.au gushed forth ladder predictions from no fewer than 15 journos. One of them was the only prediction to squeeze a computer model out of the top 5: Paul Bastin’s. Paul was bullish on Brisbane (8th) and bearish on Sydney (14th), but done in by his faith in Adelaide (3rd) and lack thereof in the Bulldogs (15th). Score: 67.7

A few media outlets ran preseason fan surveys, drawing on the wisdom of the crowd to compile ladder predictions. Some crowds were more prescient than others. The best was from AFL.com.au, which finished 6th overall, beating out every single expert from the media but Paul Bastin. Score: 66.7

Of other crowd-sourced predictions, The Roar and The Age were also better than most pundits. Reddit r/AFL’s attempt, however, was only marginally better than taking the 2018 ladder and guessing it would be the same again.

Look, predicting the ladder is hard. It makes fools of us all. Unfortunately, someone has to be last, and this year it’s Damien Barrett, who tipped Adelaide for the minor premiership and Fremantle to storm into finals, alongside Sydney and Melbourne. Damien didn’t have enough faith in Brisbane (15th) or the Bulldogs (14th), and expected Geelong to slide out of finals contention. With only one of the top four correct (Richmond), half of the top eight missing, and ten teams wrong by three or more rungs, it’s a shocker. Score: 50.4