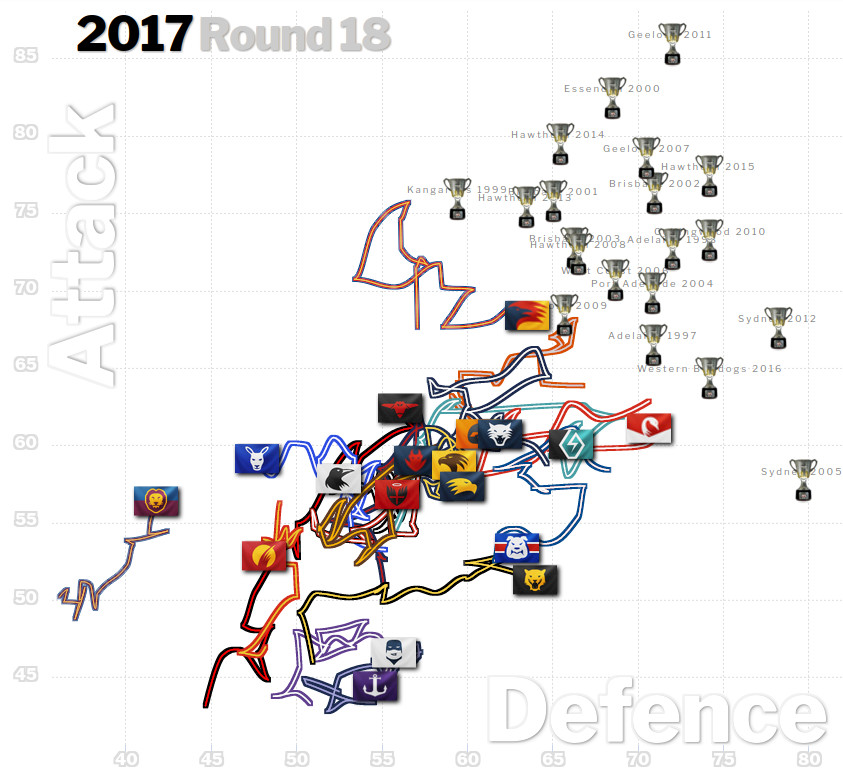 Every week I say, “It was Adelaide’s week,” and you know what? It’s Adelaide’s week. It has to be when they put away the 2nd team while a likely 3rd and 4th in GWS and Port Adelaide turn to water. Literally, in GWS’s case. I was at that game. Super wet. Adelaide missing the Top 2 from here would require something extraordinary, like when Adelaide missed Top 4 last year, or Adelaide failed to finish 1st in 2006. Actually, Adelaide does this a lot. But those are coincidences, probably.

Sydney are rolling on, too. In fact, let’s skip right ahead to the brand new Flagpole, which I redesigned due to popular whinging. This one builds in a penalty based on the team’s likelihood of making finals, so flags can no longer fly high on teams with no realistic chance of making the Top 8. More detail to come in another post sometime. The Swans still sit second even though they have more chance of missing finals altogether than their rivals:

There was an article by Rohan Connolly about how the pre-finals bye may mean it’s better than it used to be to finish 5th-8th, since you get to play more than a single game in a month of football, unlike the Qualifying Final winners, who have to sit around waiting for longer than is really ideal. That would be handy for the Swans, if the year that they get off to an 0-6 start, they don’t actually need to finish Top 4. Then again, if they keep up their current form, they’ll snag that anyway, because this is also the year when you won’t need many wins for 4th.

Speaking of 4th, that’s where Richmond now sits on the official ladder. Squiggle, however, probably won’t have any faith in Richmond until Trent Cotchin is on the dias holding the premiership cup. Oooh. That felt good to write. I mean, squiggle is so down on Richmond, it wouldn’t rate us if the team was jogging a victory lap of the MCG as “Yellow and Black” reverberates around and I cry hot salty tears of three decades of pent-up frustration while hugging the old guy in the seat next to me and it’s the best day of my life, it’s just the best day ever, oh God, oh God.

Squiggle can’t get past the fact that Richmond has the third-weakest attack in the league. To be sure, it’s hard to kick a lot of goals in a swimming pool. But the Tigers have been low-scoring all year, and low-scoring teams don’t win premierships. Sometimes, moderately-scoring teams with excellent defences do it. Not often. Not as often as you’d expect, given how many try. But sometimes. Richmond are far short even of that mark.

Hawthorn showed a lot in dispatching Fremantle away, but given that finals are probably out of reach, it doesn’t seem to mean a whole lot. Aside sticking it to St Kilda over that first round draft pick. That’s something.

I want to be hard on Port Adelaide, because it was another disappointing performance by a team that should be capable of more than this, but I actually watched some of the game and Melbourne were red hot. And losing by 23 points (23 scoring shots to 20) interstate to a team that’s challenging for Top 4 is not too shabby. The Inside 50 count was pretty lopsided. But still, it wasn’t exactly a capitulation, and isn’t reason to give up on the Power.

In fact, the ladder predictor still has Port for 4th. But it’s pretty ridiculous: 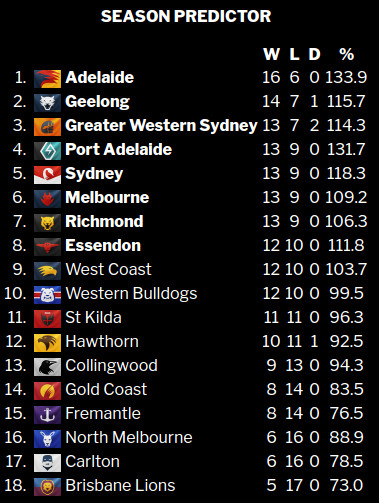 Thirteen wins for third place would be obscene and probably won’t happen, not unless we get a long-running repeat of that popular game show from last year, “Who Wants to Drop a Critical Game?”

But what it shows is that it’s wide open from 3rd down to 9th or 10th, and Top 4 spots are going cheap.

It was a brutal weekend for West Coast, who dropped a very winnable game while Sydney, Richmond, Melbourne, Essendon, and the Bulldogs all won. That’s knife-in-the-heart stuff.

St Kilda were up against it with Sydney away, and not really expected to win. But they didn’t look much like a finals team, either, and so also faded, partly because of new pressure from the Hawks from below.

But the Lions won! This raises the real possibility of a last-round spoonfight between Brisbane and North Melbourne. Now that’s entertainment.