Hurling People Now has one of those weekly previews that I never manage to catch before the weekend but this time it also has some musings on a player-based tipping model with a focus on the remarkable Mr Dangerfield: 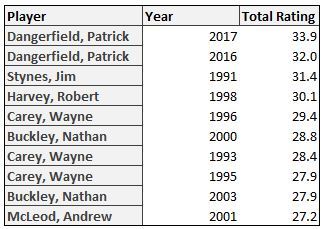 So why is Geelong struggling? Good question.

According to Champion Data, Geelong have the equal most players inside the top 25 this year – tied with Richmond on three. However, beyond this elite talent, Geelong seemingly lacks for depth.

Source: Is Patrick Dangerfield having a better 2017 than 2016? | Hurling People Now