Honestly, Squiggle is no good this week. It was one of the greatest rounds of football in history; I can’t add anything to it with charts.

That’s the good stuff. Miracles happening right in front of your face.

But since we’re here: 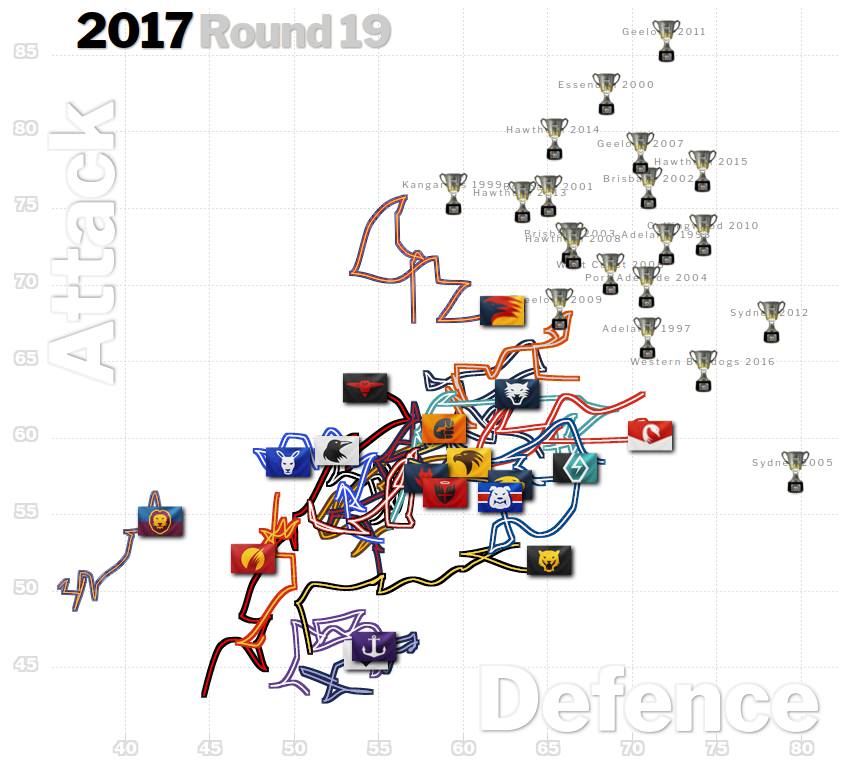 A good week for the Cats, who belted Carlton while the Crows, Swans, and Power struggled. It was just a little spoiled by the fact that Adelaide’s last-gasp draw against Collingwood was no good to the Crows for anything other than pride and finishing above Geelong, since now their percentage matters again. Assuming no more draws, that is. Of course, three weeks ago I said, “assuming no more draws,” and there were immediately two more. Teams are drawing all over the place. So who knows.

These 11-goal-wins-over-bad-teams are the kinds of games that squiggle rates and humans don’t. They’re easy to overlook, because you expect the better team to win comfortably. But it’s worth taking notice when the margin is 70-odd instead of 30.

It’s also worth looking at scoring shots. This year I’ve been trialling a new algorithm in the background that will probably take over from the venerable ISTATE-91:12 in powering squiggle next year. One of the main differences is that it pays attention to scoring shots, since teams don’t tend to remain unusually accurate (or inaccurate) for very long. Most weeks it doesn’t make a huge difference, but this week Squiggle 2.0 rates GWS much higher for their 13.20 to Fremantle’s 13.8, as well as Richmond for defeating Gold Coast 14.14 to 10.5. Geelong’s victory over Carlton becomes even more emphatic (18.15 to 8.10), and Essendon (13.19) look a lot more competitive against the Bulldogs (19.13). Also St Kilda get a technical victory against Port (8.13 to 9.9), as do Collingwood over Adelaide (15.13 to 16.7).

Meanwhile, after Adelaide’s slide, Sydney are now rated the #1 form team! Just. That’s based on their strength in home & away matches; finals will be a little different, both because Sydney are unlikely to finish high enough to get home finals, and because they’re more of a defensive specialist than most premiership teams. 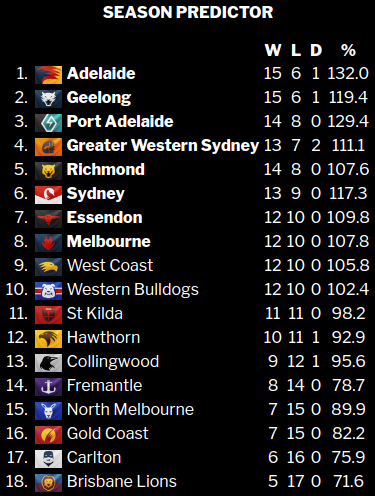 A bit of separation has emerged after the top 2, with Adelaide and Geelong likely to claim those spots. Then Port, GWS, and Richmond form a tier, for the moment, being the most likely to take out 3rd to 5th. Sydney are the most likely to jump up alongside them.

On the Tower, the long, snake-like tendrils of Hawthorn are creeping upward:

That’s a pretty significant chance of a Hawks finals campaign for a team that’s spent most of the season eyeing off 17th.

North’s continuation of their long-running curb stomp over Melbourne had the unfortunate side-effect of making a Round 23 SpoonBowl vs Brisbane less likely. But we can always hope.

This week’s adjusted Flagpole has the Swans slip below the Cats! On original Flagpole, as seen on https://live.squiggle.com.au, Sydney are still a clear 2nd. So I’m not sure about that. But we’ll go with it for now: