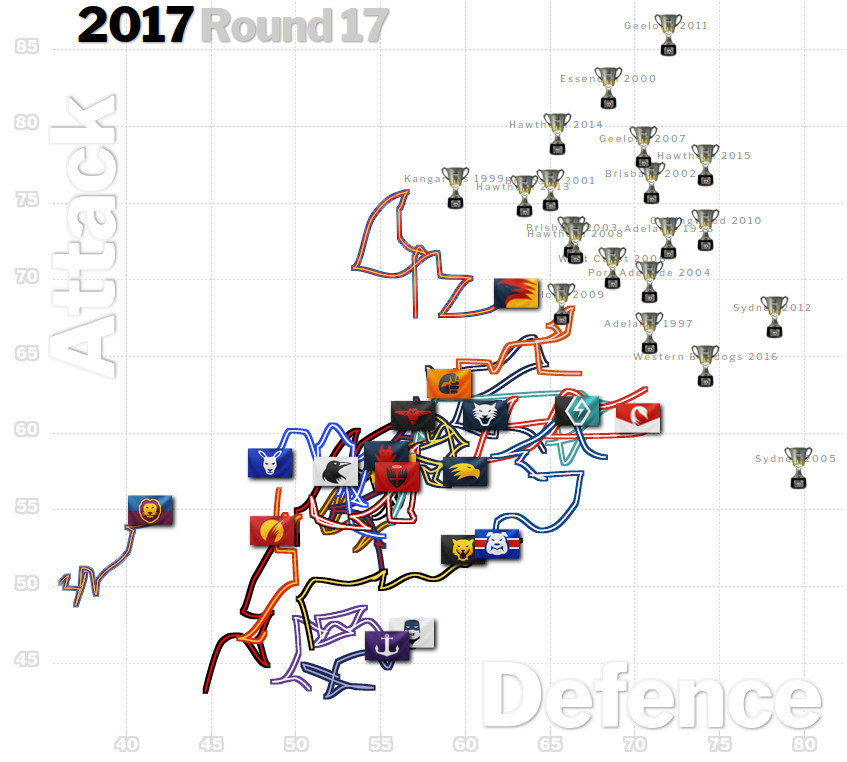 Round 17 already! The season’s nearly over. Before you know it, there will be nothing on TV and you’ll have to try to get excited about cricket. I just can’t do that any more. I was ruined by the golden age of Waugh, Gilchrist, McGrath, Warne et al. It’s just lucky I support Richmond, so I can follow footy for decades on end without ever being spoiled by success.

Things are getting messy in there. But look at Essendon go! Or even better, look at them on this chart, showing this year’s improvers: 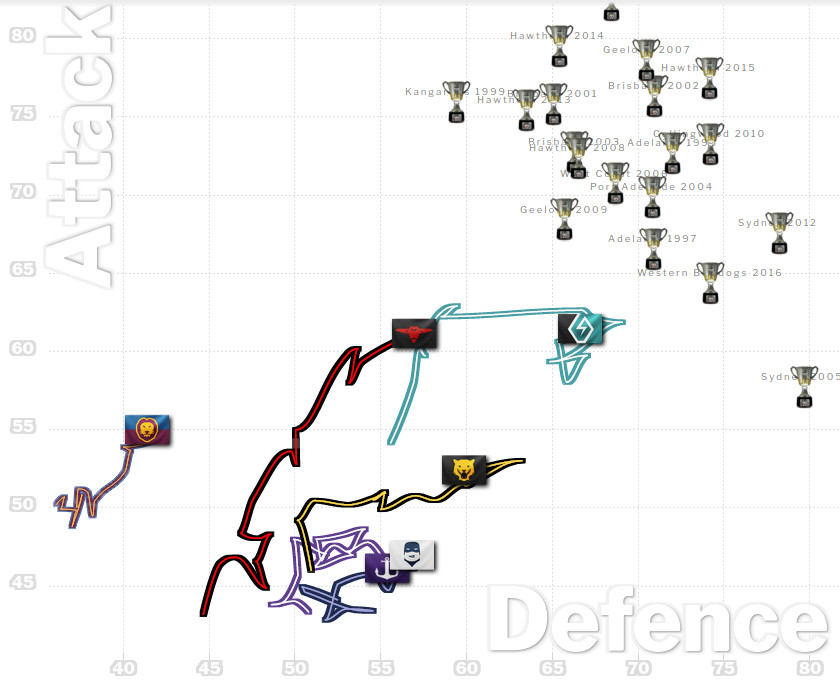 That’s a mighty rise, especially considering how far back they were. And it’s come in fits and starts, with plenty of breakout wins (over Hawthorn, Geelong, West Coast, Port Adelaide, allllmost Sydney, and now St Kilda) and terrible losses (to Brisbane, Fremantle and Carlton). But when the Bombers are on, they’re on, and they’re on track to make the finals: 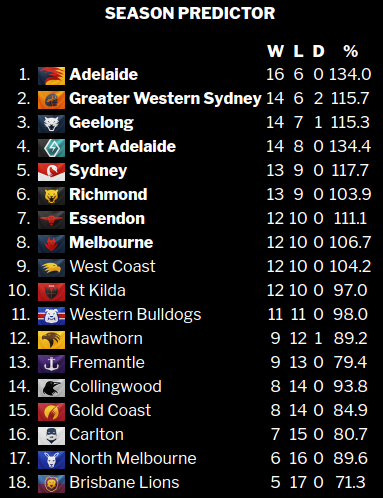 The other promising thing about Essendon is that they can score. They’re a balanced team, which is good, but they’re erring on the side of Attack rather than Defence, which is even better, because it’s the attacking sides that have proven the more effective flag collectors over the last few decades. Essendon still have a way to go, and can’t afford to take a two-steps-forward-one-step-back approach into September, if they make it at all, but it’s been a really promising year.

It was another good week for Adelaide, who were 7+ goals to the good of Melbourne. That combined with GWS’s loss to Sydney makes for a happy weekend, the only real downer being the increasing likelihood of sharing Top 4 with Port. Because that would mean no home ground advantage in a final, I mean. Not just because they hate them. But also that.

Richmond are tipped for 5th but there’s a big chance that Sydney will swallow up that spot, leaving 6th-9th to be fought out between the Tigers, Eagles, Demons, and Bombers, with the Saints and Bulldogs capable of sneaking in as well.

While the Dogs currently sit 11th on the ladder and are also tipped to finish there, that’s something of a hard floor for them. They’re currently a game and percentage clear of Fremantle, who won’t be overtaking anybody, and two games and percentage clear of Hawthorn, who otherwise might. So things probably won’t get worse for the Bulldogs, but might get significantly better.

It was a horrible result for St Kilda, who were the latest team to pull on the boots of Top Four Fancydom, take one step, and strangle to death on the laces. Not only did they get thrashed and give away the four premiership points to a fellow contender in Essendon, but every team around them except Melbourne won.

Brisbane lost, but not by as much as the squiggle expected, even though it already thought Richmond were filthy pretenders. With North Melbourne’s decreasing interest in playing football this year, the Lions are looking a little less like a sure thing for the wooden spoon each week.

Flagpole! You know how this goes.