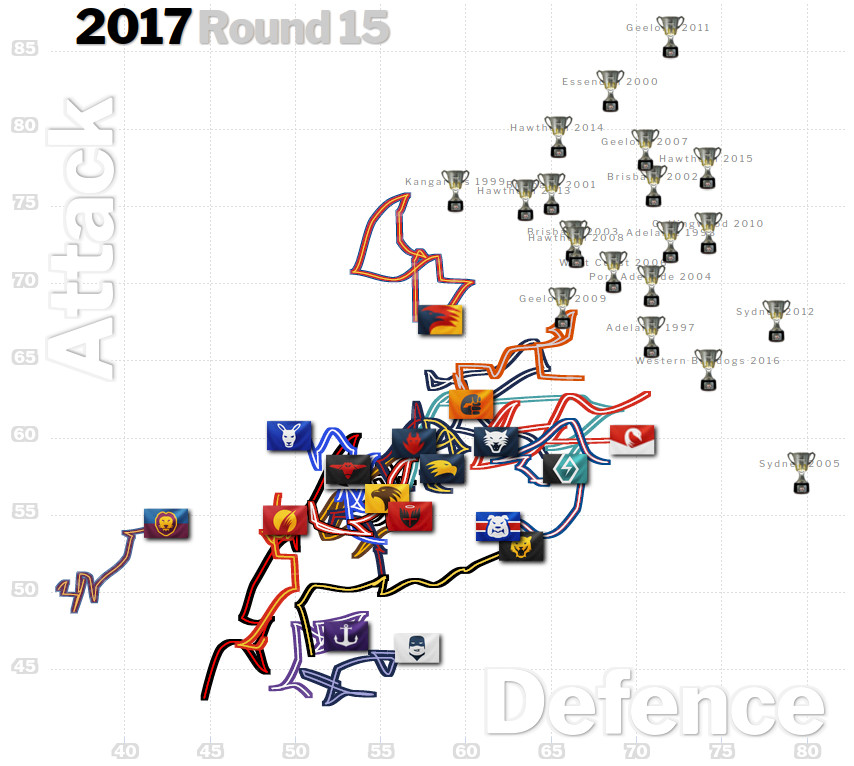 There was a Great Pancaking this round, with previously strong Attacks faltering and weaker Attacks standing up. On the chart, this looks like teams coming together on the vertical axis while moving in different directions horizontally:

That gives us a league where teams have very different Defences but on Attack can be roughly grouped as:

It was a super week for Richmond, who booked an interstate win over finals rival Port Adelaide while two other finals aspirants in Melbourne and Essendon faltered. As did the Bulldogs, although that result helped West Coast, so wasn’t as clearly positive for the Tigers. You can’t have everything. But it was a perfect storm of results for Richmond, making finals very likely and Top 4 a 50/50 proposition.

For many of the same reasons, Sydney also had a great week, recording a solid interstate win against Melbourne.

At the other end of the ladder, Hawthorn’s win over the Pies was significant, because when you’re competing against teams down there, you don’t need many wins to leapfrog them. Only two rounds ago, the Hawks looked reasonably likely to finish 17th, but after defeating Adelaide and Collingwood, that’s almost certainly not going to happen.

Now! Let’s take a moment to marvel at how bad the Giants-Cats draw was for Adelaide. You would think it was a good week for the Crows: They were the only one of the top 4 to win. But when you’re one of the three top teams, and the other two are playing each other, and you have a superior percentage to both, the one result you don’t want is for them to draw. In terms of deciding ladder positions relative to Adelaide, that’s just the same as if the Giants and Cats both won. (Assuming no more draws.) So that sucks, if you’re a Crow. Last year, Adelaide were screwed out of a Top 4 spot last year by Hawthorn’s freakish collection of close wins, so it would be really something if they get done again.

The Suns and Eagles did well, but it was a bad week for many teams: Melbourne imploded about two seconds after a successful season looked in sight, combining a loss with injury and likely suspension. Essendon did the same thing, at least the implosion part, only more spectacularly, going down to Brisbane at home. Brisbane! Just when you think you know a team.

Collingwood failed in that Collingwood way, where the result isn’t disastrous enough to prove they’re a terrible team, but screws up their season.

And Port Adelaide failed to beat another Top 8 team – which is a bad look, but the Flat Track Bully idea is still entirely mythical, as far as I can tell. You expect a team every now and again to string together close losses to good teams plus thrashings of bad teams just from random chance, without implying any kind of fundamental flaw in their game plan that prevents them from beating quality opposition. The Flat Track Bully idea also seems to contain a healthy dollop of confirmation bias, because everyone stops talking about it the second a result doesn’t fit the narrative, then resumes again a few weeks later as if nothing happened. (See: West Coast.)

So that’s probably Port Adelaide: an above-average team with a quirky results distribution. 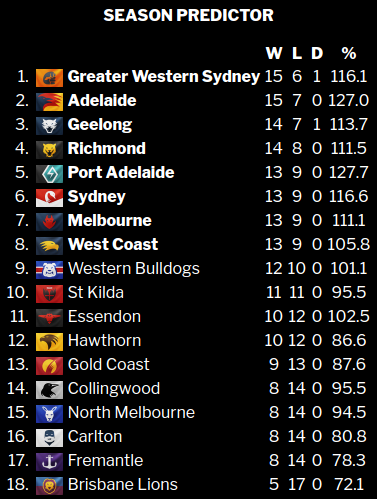 Suddenly you need 13 wins for the Top 8 again. Really, though, there are seven teams who could finish 8th without surprising anyone: Port, Richmond, Sydney, Melbourne, West Coast, the Bulldogs, and St Kilda. Add some surprise and it could be Geelong or Hawthorn!

Port are still a good shot for Top 4, but you can see the true horror of their weekend here:

And look! 2017’s one constant, Brisbane, is no longer a dead cert for the wooden spoon. They’re still about 90% likely. But with home games against Carlton, the Bulldogs, the Suns, and North, it’s possible to imagine a future in which the Lions get up off the canvas.

To Flagpole! Sydney’s high position doesn’t look so silly now, does it? No. It does not.

Richmond remain concerning. I mean concerning if you support Richmond. Otherwise they promise a hilarious finals flame-out. The Tigers are coming in with one of the worst Attacks in modern history, and traditionally that hasn’t gone very well.

DID YOU KNOW??? Today’s fun fact! Only the Western Bulldogs have a non-ridiculous chance to finish either first or last. They have a 0.1% chance to finish in top spot and a 0.002% chance to finish last. (Next most likely are Essendon, who have a 0.0005% chance of finishing top, which is 1 in 200,000. For me, that crosses the line into ridiculousness. You may have different standards.)