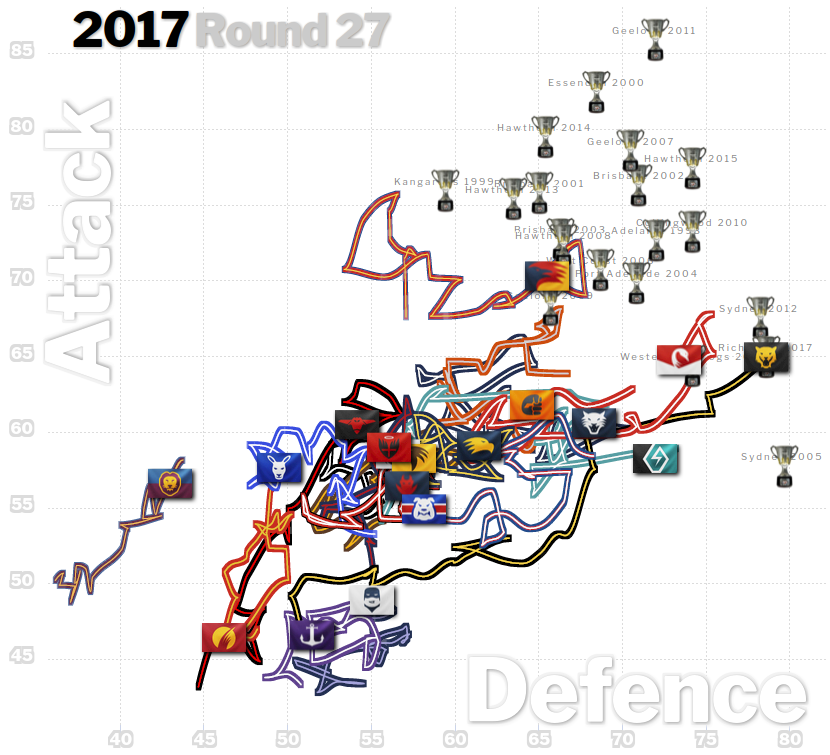 Obviously I’m posting the above just for the enjoyment of Richmond fans, not because it offers any kind of analytical insight. That much is clear, because if there’s one thing Squiggle has been consistent on this year, it’s that THE TIGERS WILL NOT WIN THE PREMIERSHIP. It didn’t rate them as a team until late, and even then was confident that somewhere, sometime, the defensive gameplan would unravel as a more balanced side got hold of them and shook until all their mediocre players fell out.

Instead, for reasons that leave me equal parts baffled and tumescent, Adelaide turned up on Grand Final Day and played listless football. At no point did it look like an Adelaide game; instead, it always resembled a Richmond game: close and scrappy, with Tigers outworking and outrunning their opponents, taking risks, swarming, and halving and winning contests one by one until the weight of numbers was too great to resist.

In this way, it was the same story as the two previous Richmond finals – moreso, if anything, than the preliminary final, where GWS at least occasionally managed to look like a team not playing Richmond. Where Squiggle expected the Tigers inevitably to break down, they barely showed a crack.

Why this happened requires a closer look at game style than I can provide. But we can examine how unusual it is, and how it fits (or doesn’t) with other modern premierships.

Richmond’s triumph replaces the 20-year-old 1997 Adelaide premiership on the chart, leaving something of a two-island effect, with four defence-oriented flag teams set a short distance away from 16 balanced or attacking ones. On its face, that still looks like evidence that low-scoring teams do worse, especially if you consider the number of wrecks of premiership campaigns located here, most of which belong to Sydney, Fremantle and St. Kilda. But it’s very noticeable that it now hosts the two most recent flags. In fact, by the time next season rolls around, you will have to go back seven years to find a premier that wasn’t either defensively-oriented or Hawthorn.

So is it still better to be attacking? Plenty of evidence remains for the benefits of attacking football, but it stops rather abruptly at the end of 2015. In 2016, the four most defensive teams made prelims, while Adelaide, a high-rated attacking team, fell out unexpectedly in the semi-finals. 2017 has been more ambiguous, with another finals failures from defensive specialists Sydney (and, to a lesser extent, Port Adelaide), but a dominant finals campaign from the Tigers. Whether this means the game has evolved, it’s a temporary aberration, or squiggle has no freaking idea what it’s talking about, I leave to you.

In terms of raw dominance, the 2017 Tigers are rated tenth of those 20 flags, so pretty much bang in the middle, but 2nd for defence and 18th for attack.

The Tigers didn’t come from as far back ahead of finals as the Bulldogs did last year – no-one has – but they did move a long way by thrashing all three opponents. They also moved a long way over the course of the season, after a lacklustre 2016 that ended with an 88-point loss to the Giants and a 113-point belting at the hands of the Swans. Some travelled further, but no modern premier has started the year as far back as Richmond did in 2017.

On balance, the Bulldogs 2016 premiership remains the greater anomaly, given how poor they were leading into finals, the need to win 4 straight games, two of which were interstate, and the strength of their opposition, which was greater in 2016 than offered by the top four this year. But the Tigers are up there, particularly (from squiggle’s point of view) since they found success with a low-scoring game style that has a terrible historical strike rate.

Richmond had a generous draw in 2017, with only one double against a top-8 opponent (GWS) and three doubles against the bottom 5 (Carlton, Brisbane, Fremantle). It was also a good year to be thereabouts, with a very even competition and no dominant team; probably the least competitive top end field since 2009. But they were also unlucky not to have another close game or two fall their way, deserved to finish top 4, and were emphatic in dismantling each opponent once they got there.

On a personal note, thank you for following Squiggle 2017, and the earlier ones, if you’ve been on board for that. It’s been an amazing ride. But I think this is a good place to leave it, with the team I love obliterating my algorithm and demonstrating how much greater the game is than all the bullshit I do here. So I will stick around BigFooty but not start a squiggle thread next year. In the words of a great man, I am going to spend some time on my novel.

And again, holy shit. I remember complaining about how bad the Tigers were with a guy on my bus, and him saying don’t worry, we’d come good in a couple years. That was around 1986. We were on our way to school. I’ve followed this team through the 29-year period where we missed the finals 27 times. People don’t appreciate that; the numbers are too big to really comprehend what it’s like to be bad year after year and have that go on almost without break for three decades. Until this year, I’d never seen Richmond win a final in person – I have seen us get smashed from the opening bounce twice – and was too young to remember the last time we made a Grand Final. But now. Holy fucking shit.

I was expecting to be able to report here my experience on which is really worse: being bad forever or losing a Grand Final. All I can say is I still suspect it’s the first one.

I like football because it’s so divorced from reality, it doesn’t matter what else is going on in your life, everyone’s on common ground. It doesn’t matter who you are. You can connect to people and everything about the two of you is irrelevant except what you think of the teams, or how badly the AFL are managing the rules. It strips us all down to something simple and clean. That’s a great thing.

May your off-season be brief, your trades fruitful, and your spuds delisted.