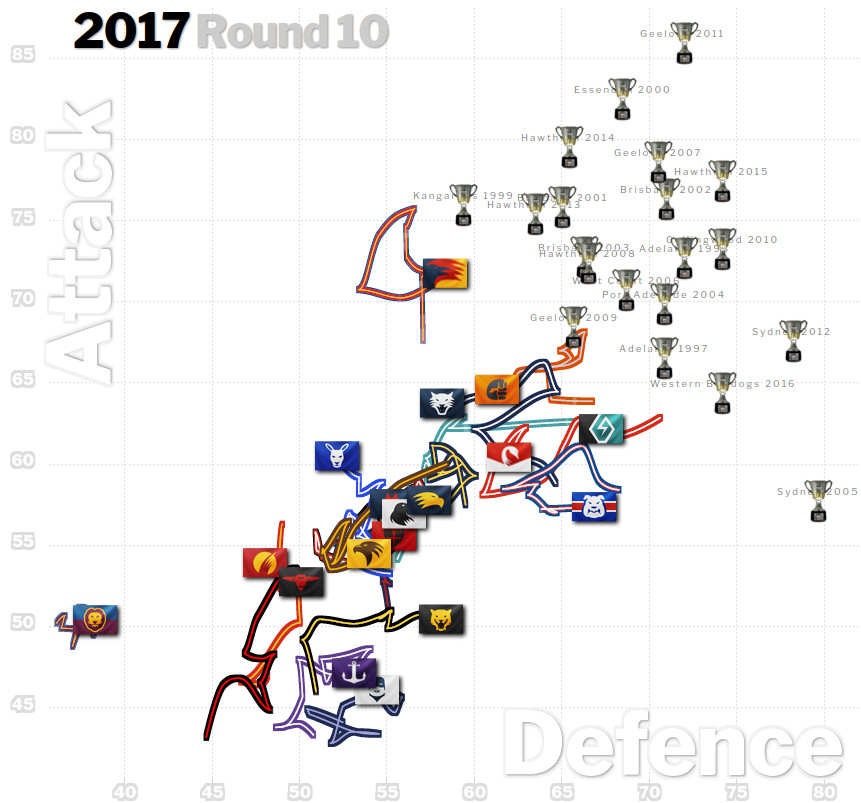 Only one genuine upset this week, for a change, with the Hawks surprising Sydney at the SCG. Aside from that, we had two games that always looked likely to be close (Geelong pipping Port Adelaide and the Giants scraping home against the Eagles) plus a bunch of wins by favourites.

But there was still plenty of chart movement, with some of those wins turning out to be bigger than expected:

It was Adelaide’s week, since a 100 point win is always a big deal, even when it comes at home against Fremantle, a team that should never have been allowed to pretend it was 5th. I mean, it’s Round 10, for God’s sake. We had North Melbourne on top and undefeated this time last year and that still wasn’t as absurd as the Dockers’ ladder position.

Fremantle remain above Port Adelaide on the ladder, separated by one win (in the Dockers’ favour) and 62.9 percentage points (in Port’s). This is pretty crazy. Either one of Fremantle being top 8 with a percentage of 81.5% and Port being outside the top 7 with 144.4% would be remarkable. Currently we have both at once.

The Western Bulldogs had a good week, too, keeping St Kilda to just 50 points. That’s worth some significant sideways squiggling.

There’s actually a bit of lateral spread on the chart this week, with defensive teams defending and attacking teams attacking. The Bulldogs and Tigers in particular were defensive specialists last year and are headed that way again in 2017. And going in the other direction are North Melbourne and the Gold Coast, who have leaned towards attack in the past and still seem to be going that way.

Sydney are more balanced in 2017, but only because their defence has fallen away, which makes them look more like a normal team instead of the defensive specialist they’ve been for most of this century.

The Swans remain a surprisingly good prospect for finals, though. They’re 15th, and with the bye next week, will be 16th if Gold Coast beat the Eagles. That should rule them out completely, with the Bulldogs up next, and a bunch of other contenders in their run home, including the Giants, Cats, and Crows, the Hawks in Melbourne again, and the Tigers at the MCG. But despite all that, they’ve shown enough fight that it’s still plausible that they go 8-4 from here. And 11 wins may be enough to finish 8th. 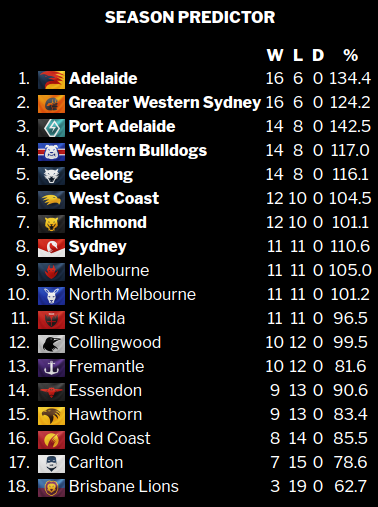 Similarly, North Melbourne are going along all right. Their 0-5 start hides a bunch of very close losses, and the fact that they’ve been a much stronger team than most people expected in 2017.

Squiggle is still fairly pessimistic on Richmond, with the Tigers failing to put anything really convincing on the scoreboard against Essendon. But they did win! That was nice.

As a random oddity, Richmond are what you get if you combine Brisbane’s attack with Adelaide’s defence. Which sounds horrible, but actually isn’t that bad. So if Richmond and Brisbane played the same team, they would kick the same score, but Richmond would keep the opposition to less. And if Richmond and Adelaide played the same team, they would keep the opposition to the same score, but Adelaide would kick more themselves.

Port Adelaide were expected to just fall short against the Cats, so don’t move anywhere much on the chart. But dropping a 50/50 game is bad news for your ladder position, so it hurt their top-2 prospects quite a lot. Especially since Adelaide and GWS both won. 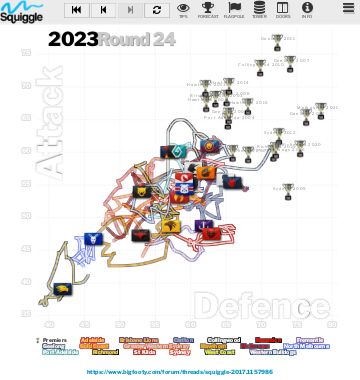