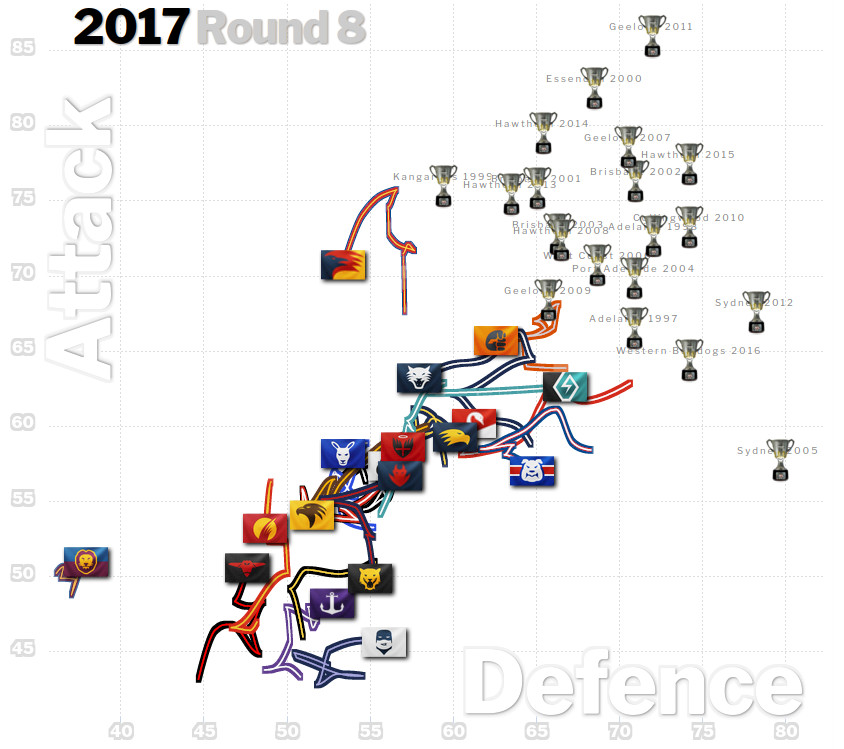 Squiggle is very excited about Port Adelaide this week, because keeping an interstate team to 38 points in one of their home games is a big deal, normally. It may be less so when the game is played in China, and the nominal home team has a whinge beforehand about how they don’t even want to be there. Nevertheless: An excellent defensive performance by the Power, timed for maximum gloating value with Adelaide losing at home.

Adelaide have fallen swiftly for two reasons. Firstly, both weeks they’ve lost by a lot, which is never good. You don’t want that. Secondly, they’ve been held to low scores, when high-scoring was the main thing they were good at. It’s concerning because unbalanced teams (as Adelaide are, being an attack specialist) are fragile: They often win a lot of home & away games, or run close, but come unstuck when it counts. So the task for Adelaide now is to prove that they’re more than a one-trick pony with a trick that’s been worked out.

Melbourne are the other big winner, and Essendon and Sydney had positive weeks. In the Swans’ case, it was the first time all year they outperformed expectations. Lowered expectations, that is. If you keep sucking often enough, eventually the bar gets so low you can’t help but clear it. And clear it they did! So that’s something. In fact, it’s enough to make finals more likely than not: 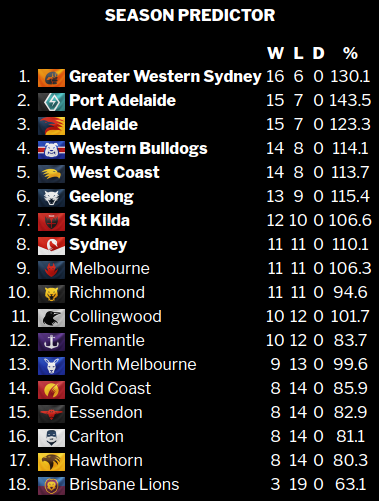 That’s Richmond sliding out of the top 8, despite their excellent comeback win over the Dockers. Honestly, at three-quarter time, when we were down 35-65, I didn’t think we could win it. Then we kicked 5 goals unanswered goals to hit the lead with only 21 seconds left on the lock – an unloseable position! I leaped up in the stands and cheered my lungs out, thinking, “Wow, this is so un-Richmond-like!”

Oh, but then it was. Suddenly it was all very, very Richmond-like.

Fortunately, at this point, my heart is already about 99% scar tissue. I mean, you can only stab me there so many times before I cease to feel anything.

Adelaide’s grip on top spot loosened considerably this week, and a bunch of teams benefited, because someone has to finish top 4, even if right now no-one seems like they want to. Essendon’s win over Geelong opened up some bottom-2 real estate, with Hawthorn, Carlton, and Gold Coast the most likely buyers.

Fortunately in these turbulent times Brisbane provide some reliability. To Brisbane fans, all this talk of 2017’s unpredictability is probably pretty grating, because every week the Lions are getting beaten by exactly as much as you’d expect.

Speaking of the Lions’ next opponent, Adelaide are still #1 on Flagpole, even if the Season Predictor is tipping them out of the top two.