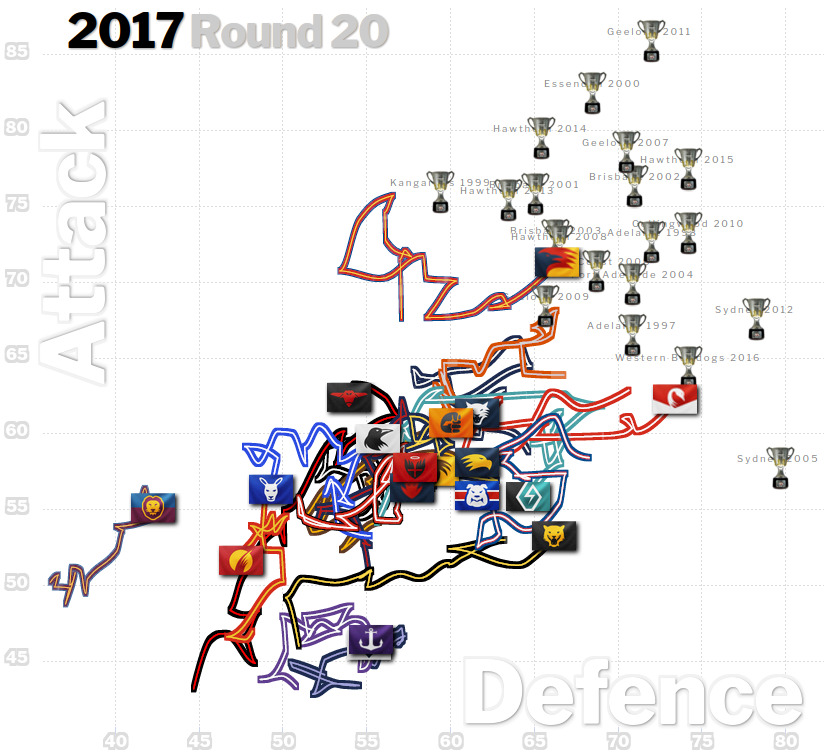 That was a big round of football!

Sometimes a round is full of crucial matches and they turn out to be close games, so, sure, they’re entertaining, but you don’t learn a whole lot about either team, other than that they’re evenly matched.

Adelaide firmed into a solid, erect position, thrusting firmly into the open, inviting premiership zone. That’s quite a trajectory you’ve made there, Adelaide. There’s a real cockiness about it. It came about after a graphic display against the Power, the Crows taking a liking to the wet, slippery conditions and dominating, especially the behinds (18.22 to 7.4).

Less phallically, Sydney demolished Geelong to move into that part of the chart I should really just go ahead and name THE SYDNEY AREA, because the last season they didn’t spend time there was 2010. No-one else wants to live there, Sydney. It’s really just you and whoever Ross Lyon was coaching at the time. But you keep coming back, year after year.

The week belonged to those two teams, who put a lot of space between them and the rest of the field.

But it was also terrific for Richmond! In fact, I now think Richmond is going to win the flag. This is not supported at all by squiggle. It’s more of a vibe. I’ll explain more below.

Gold Coast have had a pretty ordinary second half to the year after a promising start. So have North Melbourne, who were far more competitive a few months ago, even though they weren’t winning games. 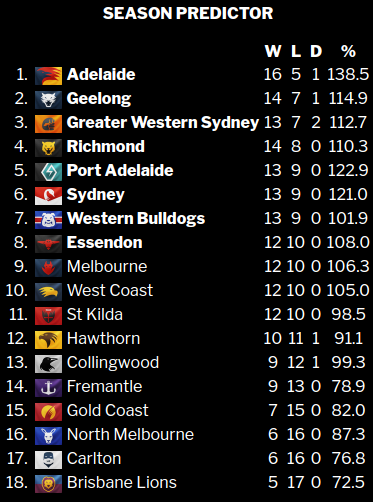 This time of year, the Season Predictor becomes less helpful, because with so few matches remaining, you can just about figure things out yourself. Also it averages out a team’s chances of winning each match, which works much better over the long-term than just three games.

But Tower of Power is always interesting! Lots of movement this week:

The trapdoor opened up beneath Geelong, but with games against Richmond (at Kardinia), North, and GWS, they still have a pretty good path to 2nd. And with a 1.5 win break over 5th, things would have to go horribly wrong for them to miss the top 4.

Since Geelong, GWS and Richmond play each other in the remaining three rounds, the effect of each result is magnified. So right now those three teams have a pretty even chance of finishing 2nd, and it will go to whichever of them manages to stand up.

The desolation of Port Adelaide left a lot of room for Sydney and Richmond to move into.

And the Bulldogs still have a remarkable array of plausible finishes! They have a 5% chance or better in every slot from 4th (where Geelong lose a lot) to 11th.

On Flagpole, it’s good night to the Hawks:

And otherwise the usual story. Adelaide are surrounded by premiership cups on the main chart; they are going to be 1st.

Now: Why Richmond will win the flag!

Obviously I’m 100% only writing this because I’m a Richmond supporter. Squiggle doesn’t foresee good things for Richmond in the finals. But this section applies to other teams as well.

It’s all about the killer bye. The bye is bad, for mysterious reasons, and has always been bad, going back decades. More specifically, it’s bad for teams that had a bye last week when their opponent didn’t. There is plenty of data on this: Those teams underperform.

The only mystery has been why the bye becomes good when you get one thanks to a qualifying final victory. In those cases, the bye works like it’s supposed to, and they win repeatedly and reliably.

Until last year, when we had a pre-finals bye for the first time, and after winning Qualifying Finals, Geelong and GWS both lost. Instead, the Bulldogs won the flag from 7th. Now we all know that had never been done before, which is remarkable enough in itself. But what makes it amazing, and a little suspicious, is that no-one came close before.

If the Final Eight system offers a reasonable chance for 7th to win the flag, you would expect, at some point this century, a team to have at least made the Grand Final from 5th or 6th. Not win the premiership; just make the GF. But nope. 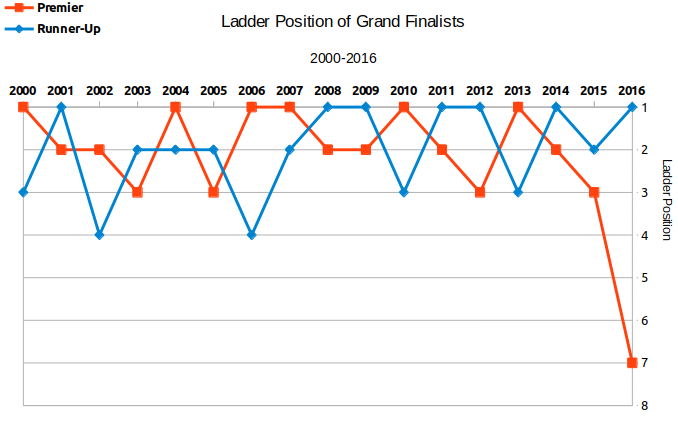 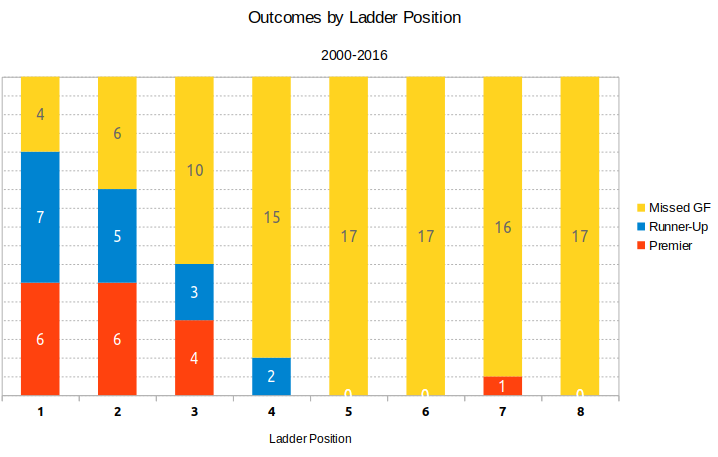 It may well be that 2016 was just one of those years, and the Bulldogs one of those teams, and it’ll never happen again. But another explanation is that this answers the mystery of why the Qualifying Final winner bye was good: It was only because it came right at the very end of the year, when all teams were exhausted, which caused the restorative benefits to outweigh the usual negative effect. But since the AFL introduced a pre-finals bye last year, that benefit vanished, and all that’s left is the usual killer bye, where teams that had a week off do worse against teams that didn’t.

If so, it’s a far more open race to the flag than anyone thinks. A team like Sydney, in fine form but up against it to make the top 4, has a perfect run to the flag. A team like Richmond, who might finish 4th but be unable to beat 1st in a Qualifying Final, has a much better shot at redemption than history would suggest. And a team like the Bulldogs, or Essendon, who in previous years would be dismissed as just making up the numbers, can actually go all the way if only they find form at the right time.

The only certainty of the finals campaign this year may be that the form team wins no matter where they placed on the ladder.

That aside, the other reason why I think Richmond will win the flag is that statistical analysis like squiggle is only about what’s most likely to happen. Unlikely things happen all the time. They happen all the time in football. I’ve followed the Tigers my whole life and I wasn’t paying much attention to football the last time we were anything like a flag threat, so I don’t want to spoil this one with an over-reliance on what stats say usually tends to happen. I’m going to roll with the fact that anything might.