The official AFL ladder predictor has a few problems:

So I made a new one! 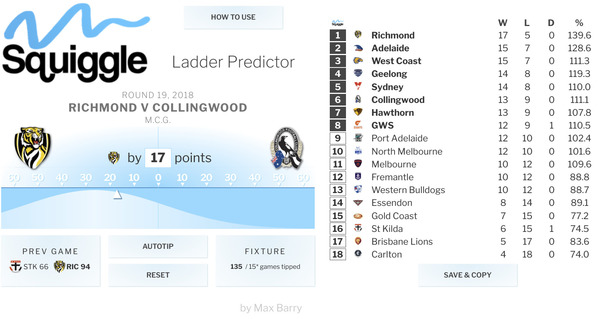 Now you can tip as few or as many games as you like and lean on the world’s best computer models to fill in the rest.

You can even go back and change some of the computer tips if you want.

I believe the world is a better place when people can generate wildly optimistic ladder projections with ease.  At the moment it’s only for the home & away season, but I’ll probably add finals sometime later.

The Predictor fetches data from the Squiggle API, including Aggregate tips from computer models such as The Arc, Matter of Stats, FMI, HPN and many more. This provides a tip for each match as well as a confidence rating about how likely the team is to win.

It’s no good to simply tip the favourite in each game, though, because in real life, favourites don’t always win. For example, if two people play 10 games of chess, and one player is 60% likely to win each match, we want to be able to predict that the final tally will be about 6-4, and not 10-0, like we’d get if we tipped the favourite to win each time.

So AutoTip runs several thousand simulations, each time applying an amount of randomness to the predicted result, so that a team that is 70% likely to win a match will only win it in about 70% of simulations.

The simulations are then analyzed to determine the average finishing rank, number of premiership points, and percentage of each team.

This provides a pretty reliable estimation of where each team is likely to wind up on the ladder. However, we don’t merely want average numbers: We want to see specific tips for each game. So next AutoTip scores each simulation based on how closely its ladder resembles the average. Then it selects the “most normal” one.

This means AutoTip will contain many upsets, and which upsets they are will change each time. But the upsets will be spread around evenly, so that each team finishes the season about where they’re expected.